The 98FM DJ is one half of the band with Ronan Nolan and released their first song in August 2016, We Met At A Party.

The duo’s latest tune Graceful Danger is an emotional song and Dara said when talking about the song, “Nowadays a lot of people are exposed to these pseudo perfect lives on the Internet.”

Graceful Danger: Apella’s new video features all that goes on in a couple’s relationship | YOUTUBE

The video features a man and women in a home through all their ups and downs – from cuddling in bed to an aggressive and physical argument.

“The concept for Graceful Dancer was to capture a relationship in turmoil behind closed doors. The part you don’t see on f**king Instagram,” Dara told Entertainment.ie.

Apella will also be hitting five counties around Ireland this year between April and August – Louth, Dublin, Laois, Donegal and Cork.

Catch them live at the dates and places below: 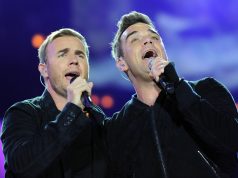