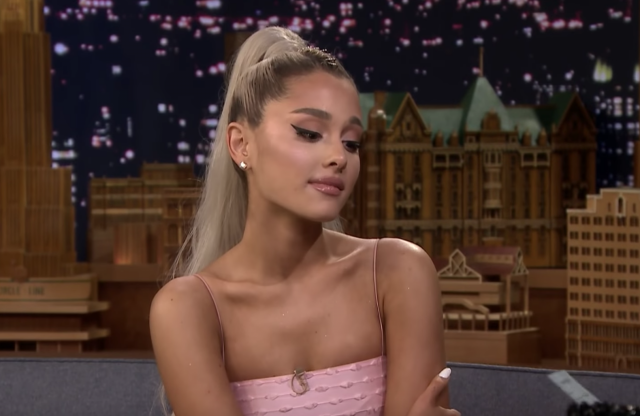 Ariana Grande held back tears during her first television interview since the Manchester Arena terrorist attack.

The 24-year-old, who released her new single No Tears Left To Cry last month, appeared on The Tonight Show with Jimmy Fallon on Tuesday.

Ariana’s appearance marked her first televised appearance the Manchester attack, which happened just under a year ago.

Towards the end of her interview, the show’s host Jimmy praised Ariana for being so strong.

“I know it’s just tough for everybody, tough for fans and tough for you, and I know you haven’t done any interviews, and I understand that.

“I just wanted to say thank you so much for coming on the show and for being strong and for entertaining and for showing up and going back to Manchester and doing a benefit. I thought that was awesome of you. I just think you’re so strong and so cool,” he added.

Ariana simply replied, “Thanks, thank you,” as she held back tears.

The terrorist attack, which took place after Ariana’s concert in the Manchester Arena on May 22 2017, killed 22 people.

Following the attack, Ariana and her team organised the One Love Manchester benefit concert at the Emirates Old Trafford cricket ground.

The concert raised a huge amount of money for the victims and all families that were affected by the bombing.