Kanye West dropped a massive $85k (€73k) on a photo of Whitney Houston’s drug-infested bathroom for the cover of Pusha T’s new album.

The 40-year-old revealed the artwork for Pusha’s upcoming album DAYTONA, which Kanye produced, this week.

The cover features a photo of Whitney Houston’s bathroom, which was taken by a family member back in 2006, when the late singer was struggling with her drug addiction.

Speaking to Entertainment Weekly, Pusha T said, “I feel like the cover represents an organized chaos. The energy of the album is a bit chaotic, but it’s all in place.”

“Look at that cover, I’m sure whoever frequents that bathroom or area knew whatever they wanted to find and knew where it was.”

On The Angie Martinez Show on Wednesday, the rapper revealed that Kanye changed the album’s artwork at the last minute – and it cost him a lot of money.

“He changed my artwork last night at 1 a.m. He wasn’t feeling it. [Originally], the artwork — it was pictures that we all agreed on,” he said.

“I said, ‘Hey, I don’t want to pay for that and I wasn’t even going to ask you to pay for that. We picked what we picked, it’s here, it’s ready,'” he continued, but then Kanye told him, “‘No, this is what people need to see to go along with this music. Imma pay for that.’ I say, ‘You my man! You my man!'”

“I love it, I actually do love it. [But] I absolutely did not want to pay for it,” he laughed. 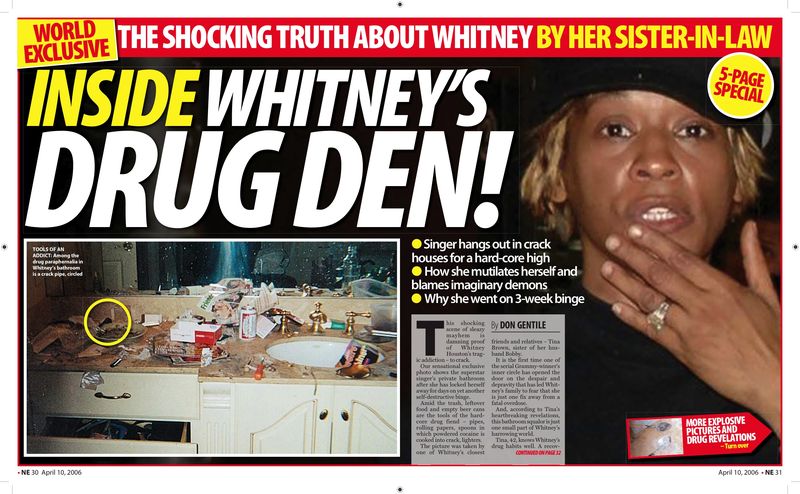 The photo of Whitney’s bathroom featured on the cover of the National Enquirer back in 2006.

The songstress was found dead in a bathtub at The Beverly Hilton hotel in 2012. Her autopsy revealed that she had marijuana, Xanax, Benadryl and other medication in her system.

Her death was ruled an accidental drowning, but heart disease and cocaine use was also to blame.