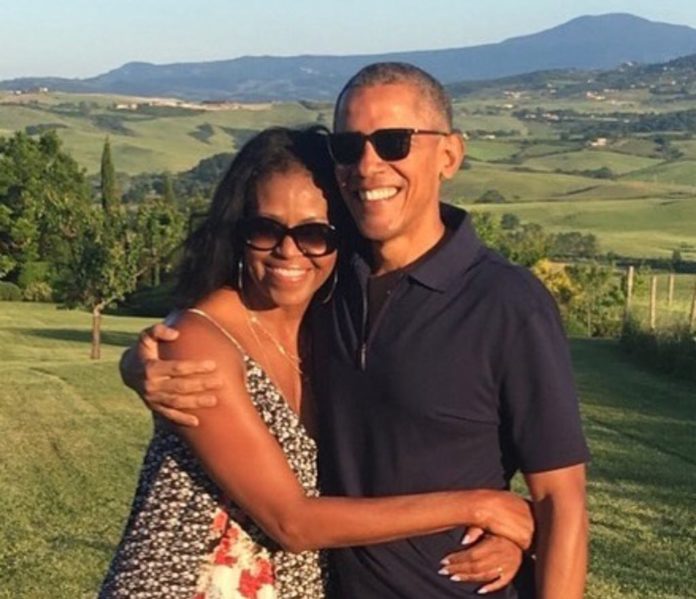 Barack and Michelle Obama have been spotted dancing at Beyoncé and Jay-Z’s concert.

The former US President and First Lady attended Bey and Jay’s ‘On The Run II’ Tour on Saturday.

The couple were filmed grooving along to the music at the concert in Maryland.

An eyewitness told E! News that the Obamas danced to Beyoncé and Jay-Z’s final song,  “Apes**t.”

Fans were “Crazy in Love” with Michelle and Barack Obama’s dance moves at Beyonce and Jay-Z’s concert on Saturday https://t.co/CLtGrlX5DQ pic.twitter.com/SqENJ6Ruce

The onlooker added, “It looked like they had a great time. Every time we turned around, they were enjoying themselves and in the moment. It did feel like they were just like us.”

Michelle and her daughter Sasha had previously attended the ‘OTRII’ tour in Paris.

The former First Lady stood in the front row for the concert in Paris, and was seen dancing with Beyoncé’s mother Tina.

The Carter’s and the Obama’s have been close friends for years, with Beyoncé and Jay-Z supporting Barack in his first and second Presidential Election.

Beyoncé also famously sang ‘At Last’ for the couple’s first dance at the Inaugural Ball back in 2009, and at Michelle’s 50th birthday party in 2014.