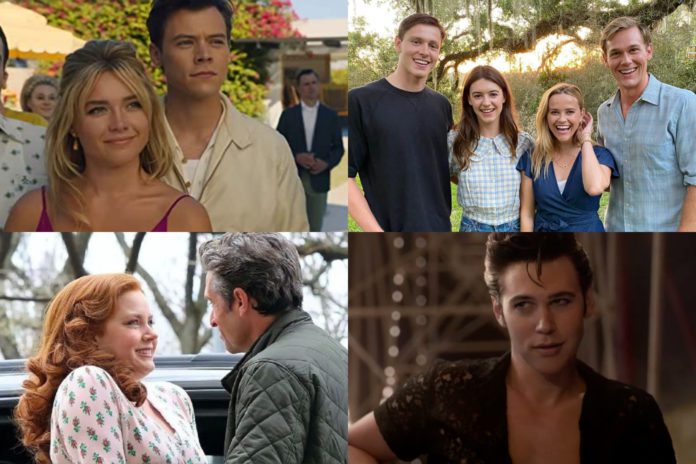 2022 has already graced us with some memorable movies including; Doctor Strange in the multiverse of Madness, Unchartered, The Batman, and most recently, Top Gun: Maverick.

But, there are still movies due to be released before the end of the year that we can’t wait to watch.

A post shared by Disney and Pixar’s Lightyear (@pixarslightyear)

Lightyear, the spin-off series to The Toy Story franchise, will serve as a backstory for the fictional astronaut Buzz Lightyear.

A young buzz tries to find his way back home after being marooned on a hostile planet with his commander and crew, while also confronting a threat to the universe’s safety.

Lightyear will be released exclusively in cinemas on June 17th, before being released on Disney+ at a later date.

Elvis received a ten-minute standing ovation for its debut at the Cannes Film Festival. The film is directed by Baz Luhrmann, who has directed the likes of The Great Gatsby (2013) and Moulin Rouge! (2001).

Also reflected in the storyline is The King of Rock ‘n’ Roll’s wife of six years Priscilla Presley, played by Olivia DeJonge, who played a significant part in the star’s life.

Elvis will be released in cinemas on June 24th.

Where The Crawdads Sing – July 15

A post shared by Where The Crawdads Sing (@crawdadsmovie)

The mystery drama Where The Crawdads Sing is based on the novel of the same name, by Delia Owen.

Abandoned by her parents and older siblings, Catherine “Kya” Clarke (Daisy Edgar-Jones) learns to survive by herself in the 1950s.

After her relationship ends with Chase Andrews (Harris Dickinson), Chase turns up dead, and Kya is engulfed in a murder trial, with stacks of evidence against her.

Where The Crawdads Sing will debut in cinemas on July 15th.

Pinocchio is Disney’s latest live-action remake following the suit of Beauty and the Beast, Cinderella, Aladdin and many more.

The film will not debut in cinemas, yet will appear on the Disney+ streaming platform, like a number of its predecessors like Mulan.

Benjamin Evan Ainsworth, who appeared in Netflix’s The Haunting of Bly Manor, will play the title character, appearing alongside acting mogul Tom Hanks as Geppetto.

Pinocchio will land on Disney+ on September 8th.

The film is directed by Olivia Wilde, and boasts a stellar cast including names like Harry Styles, Florence Pugh, Chris Pine and Gemma Chan.

Set in the 1950s, Alice (Florence) and Jack (Harry) Chambers are a young, happy couple living a utopian life. However, Jack’s mysterious line of work raises Alice’s eyebrow, and her curiosity leads to cracks in their relationship.

Don’t Worry Darling will debut in cinemas on September 23rd.

Hocus Pocus 2, the sequel to the cult classic is set to be released nearly 30 years after its predecessor.

Bette Midler, Sarah Jessica Parker and Kathy Najimy will reprise their roles as the iconic Sanderson Sisters, as they return to wreak havoc in Salem, Massachusetts.

The sequel was written by Jen D’Angelo and directed by Anne Flecther. Director Adam Shankman was originally due to direct the film, however due to a conflict with his work on Disenchanted, he will only remain on the project as en executive producer.

Hocus Pocus 2 will be released on Disney+, just in time for the 2022 spooky season.

Halloween Ends is the sequel to 2021’s Halloween Kills, and is the thirteenth film in the Halloween franchise.

It was originally planned that Halloween Ends and Halloween Kills would film back to back, but this didn’t happen due to the “intense schedule”.

Jamie Lee Curtis and Nick Castle are set to reprise their roles as Laurie Strode and Michael Myers in the upcoming slasher film.

Halloween Ends will land in cinemas on October 14th.

Ideas for the second Black Panther film began swirling after the initial success of Black Panther in February 2018. However, plans for the film were forced to change due to the tragic death of Chadwick Boseman in 2020, who played the title character.

In December 2020, the film’s director Kevin Feige stated that the role of King T’Challa (Chadwick), would not be recast. It is yet unclear what storyline the film will pursue, but we’re excited to find out!

The film is set to be the 30th film in the Marvel Cinematic Universe (MCU).

Disenchanted, the sequel to Disney’s 2007 masterpiece Enchanted, will see Amy Adams and Patrick Dempsey reprise their roles as Giselle and Robert.

James Marsden and Idina Menzel will also make a comeback as their original characters, Prince Edward and Nancy.

The sequel was filmed in Ireland across Dublin and Wicklow, and wrapped filming in August 2021.

Disenchanted will make its cinema debut on November 24th, and will appear on Disney+ thereafter.

Avatar: The Way of Water – December 16

Avatar: The Way of Water will be the first of four sequels to the 2009 classic.

Director James Cameron initially aimed for a 2014 release, however, it became clear that new technology would need to be developed in order to film performance capture scenes under water – a feat which had not yet been accomplished.

Avatar: The Way of Water will hit cinemas on December 16th, making it a perfect festive season outing.