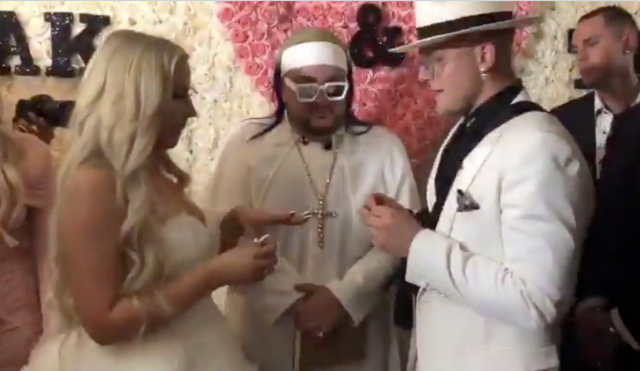 Their quickie wedding, which was already marred by controversy, raised even more eyebrows when a fight broke out right as they were having their first kiss as a married couple.

Fans who paid $49.99 to watch their nuptials on a live-stream witnessed the dramatic moment, and videos of the altercation were later shared on social media.

It’s believed the fight started after someone threw champagne at Jake and Tana as they were about to kiss.

An eyewitness told Life & Style Magazine: “At first it looked like Jake blew off the kiss, because it happened right before. He had to move as the champagne was being poured, and then the punching.”

“It was an all-out brawl, mass chaos for two and a half minutes. So much so that we couldn’t see anything. It got pushed out like a mosh pit.”

“People were on chairs trying to take pictures, and had to jump out of the way as it got bigger. There was glass broken, chairs everywhere.”

Damn! I fell bad for #janawedding this fight was not call for, I am so sad😭

Tana later confirmed the fight on Twitter by tweeting: “Someone just threw a glass of champagne at jake and I at the f**king altar holy f**k HAAHAHAHAHAHA.”

“Jana don’t need no press. wow. just married. honestly made it better…. to slow dance while they scream. i love you @jakepaul ….. hello tana paul!”