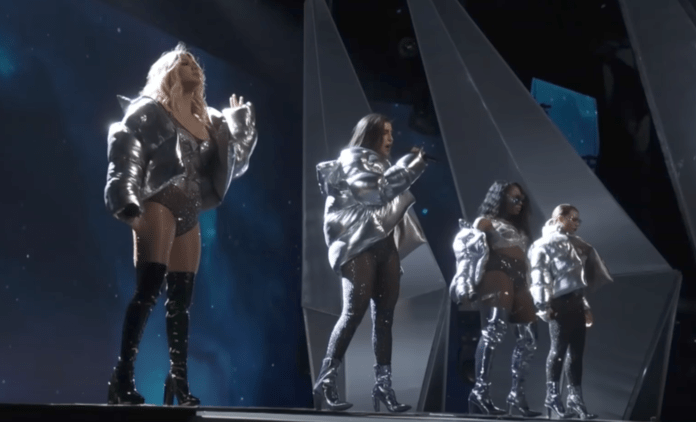 The girl band took to the stage to perform their new single Angel, and took a major stab at Camila, who left the band last year.

The girls first appear as five members on stage, before the middle member (a stunt double) is thrown off stage and disappears.

Fans believe the stunt was a dig at Camila, who left the band nine months ago in a dramatic exit, which has been followed by a very public feud between the former bandmates.

Although the foursome are putting on a united front, The Sun has reported that the remaining bandmates are on the verge of a split.

Ally Brooke, Normani Kordei, Dinah Jane and Lauren Jauregui have each been offered solo deals by their label Epic.

A label source said, “Epic believes that each member has the potential to be a superstar in their own right. They are convinced they have a winning formula if they can release their solo projects, and still look after them when they occasionally make music together.

“Epic has a first look arrangement with them which means they get first dibs on their solo projects before other labels, and expect the girls to break up temporarily after their next album.

“The girls are sisters and will always love being in a group but they’re all aware of what they could do as solo stars,” they added.