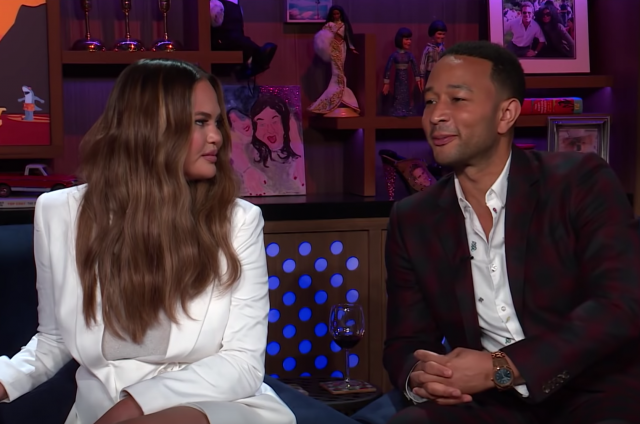 Chrissy Teigen and John Legend have revealed that they got into a “blowout” fight at Kim Kardashian and Kanye West’s star-studded wedding.

Back in 2015, Kimye invited some major stars to their wedding in Florence, Italy – including long-term pals Chrissy and John.

On Thursday, the pair appeared on Watch What Happens Live with Andy Cohen, and they recalled the huge fight they got into at Kim and Kanye’s wedding – which they still feel bad about.

John laughed, “I don’t remember what it was about,” before Chrissy elaborated, “We try to think about this all the time. I think I was really intimidated and I think I came from a lot of insecurity and I took it out on John.”

“There was a lot of fabulous, amazing people in one room … that’s where it stemmed from.”

She continued, “I was just very insecure, I think that’s where it stemmed from. And then it just, you know how things snowball into a bigger thing. And also drinking, so that doesn’t help.”

Chrissy joked, “It was a major blowout to the point where every time I see [Kim and Kanye], I feel like apologizing for it.”