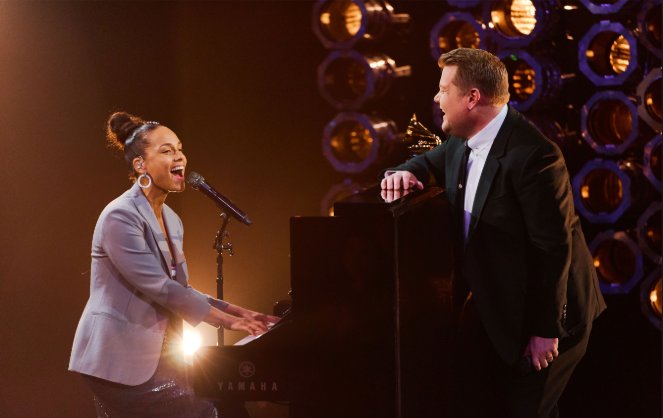 Alicia Keys has teamed up with James Corden to perform a parody of Shallow from A Star Is Born.

The hilarious parody shows Alicia, who is set to host this year’s Grammys, ask James for advice because he hosted the awards ceremony in 2017.

The talk show host sang: “Tell me something, Keys, I hear you’re set to host this year’s Grammys” to which the singer replies: “Did you host it twice? Maybe you could give me some advice.”

James sang: “Comfy shoes, after four hours you’ll find yourself drinking cheap booze, stealing from gift bags you can get for free.”

This #GRAMMYs themed duet with @JKCorden and @AliciaKeys, set to the tune of “Shallow” from @starisbornmovie, is exactly what your eyes and ears need today. pic.twitter.com/hpStMZI7EB

The Late Late Show host told Alicia to not be ‘scared’ and act like she was there before when she powerfully sang: “You know I’ve won 15 times!”

The Grammys host even slipped some of her own lyrics into the parody, she sang: “This girl is on fire.”

She also joked about rapper Cardi B’s signature ‘okurrr’, she sang: “Hanging with Cardi at the after-party how does she make that sound?”

Alicia finished the parody with: “I think I’ll be all right, on music’s biggest night, I’m hosting the Grammy’s now.”