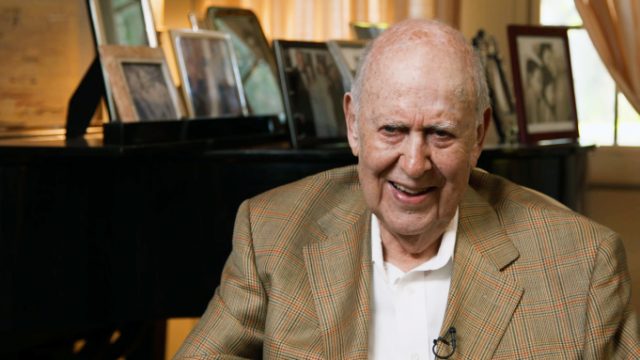 Hollywood comedy legend Carl Reiner has sadly passed away at the age of 98.

The actor’s assistant Judy Nagy has confirmed that he died of natural causes at his Beverly Hills home on Monday night.

Following the news of his death, tributes have poured in for Carl on social media.

His filmmaker son Rob tweeted: “Last night my dad passed away. As I write this my heart is hurting. He was my guiding light.”

Last night my dad passed away. As I write this my heart is hurting. He was my guiding light.

Sending all my love to @robreiner, Michele, and the entire Reiner family. I'm heartbroken over the passing of the incredible Carl Reiner. Carl gave so much to so many–through his craft, his military service, his philanthropic & political advocacy, his warmth & friendships… RIP

Nonagenarian chums #MelBrooks #CarlReiner #DickVanDyke. So sad to hear of the passing of #CarlReiner at the age of 98. This shoot of these three comedy legends has been a highlight of my 30 year career. RIP Carl. pic.twitter.com/z865evMwfA

Carl Reiner was a comedy genius and a great American who entertained me and countless others for our entire lives. Blessings and Peace to his family. pic.twitter.com/jmMm5VbC7L

My friend Carl Reiner died last night. His talent will live on for a long time, but the loss of his kindness and decency leaves a hole in our hearts. We love you, Carl. pic.twitter.com/QWyNOYILhW

Carl Reiner has died at 98. He was an absolute comedy legend, going back to Sid Caesar & the old Dick Van Dyke Show & 2000-Year-Old-Man skit with Mel Brooks. Actor, movie director, active recently on Twitter. What a life. Condolences to Rob

Carl Reiner, Bronx born and bred, made TV comedy that endures to this day. He made America laugh — a true gift.

New York extends our condolences to his family and many friends. https://t.co/Xmou8kabLI

Carl was well-known in the film and TV industry, as he starred in the popular Ocean’s Eleven franchise, and he also did voice work for Toy Story, Family Guy and Bob’s Burgers.

He also played a big part in the early success of Steve Martin, by directing and co-writing four of his films – including The Jerk.

Carl was also one of the oldest active celebrities on Twitter, tweeting up until the day of his death.

He often used his platform to share his political beliefs.

As I arose at 7:30 this morning, I was saddened to relive the day that led up to the election of a bankrupted and corrupt businessman who had no qualifications to be the leader of any country in the civilized world…

… At the same time, Hillary Clinton, who had all the needed
qualifications to lead our beloved nation, had received 3 million more popular votes than our Russian-installed puppet president.

The day before his death, the 98-year-old tweeted: “Nothing pleases me more than knowing that I have lived the best life possible by having met & marrying the gifted Estelle (Stella) Lebost—who partnered with me in bringing Rob, Annie & Lucas Reiner into to this needy & evolving world.”

Carl leaves behind his three children – Rob, Lucas and Annie.