Salma Hayek has publicly praised her husband Francois-Henri Pinault and his family, after they pledged €100 million to help rebuild the Notre-Dame Cathedral.

On Monday evening, the 856-year-old building went up in flames, causing the roof and spire to collapse.

After the devastating fire was eventually put out by firefighters, people from around the world agreed to donate a lot of money to help rebuild the building – including the Pinault family.

Taking to Instagram, Salma wrote: “Today more than ever I feel proud to be part of the Pinault family. Not only for their personal and heart felt participation in the reconstruction of Notre-Dame de Paris but also because their contribution wont be claiming any tax deductions from the government.” 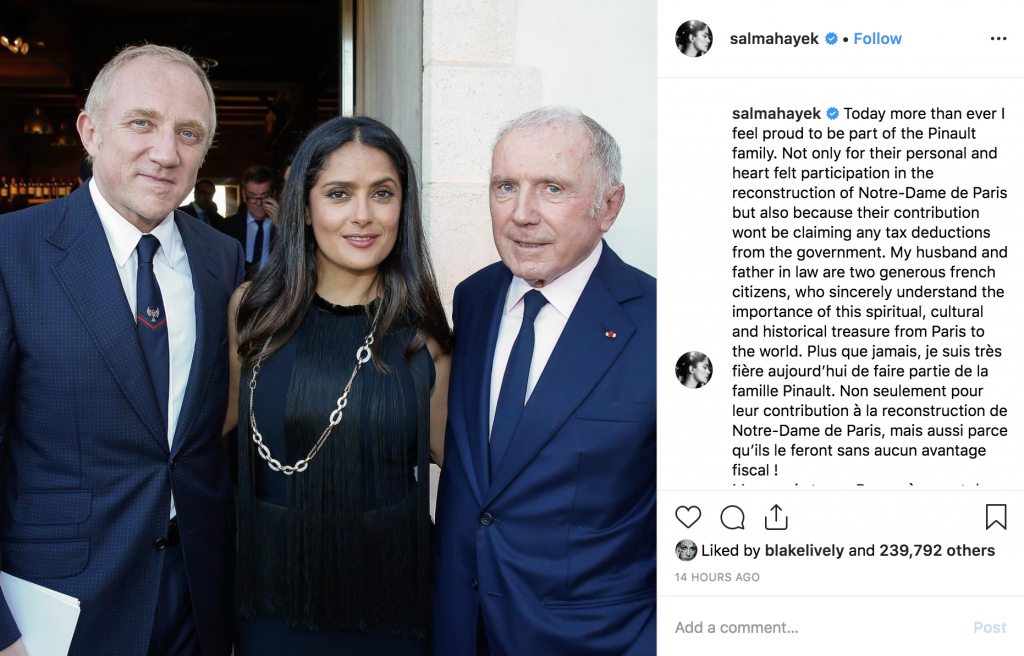 “My husband and father in law are two generous french citizens, who sincerely understand the importance of this spiritual, cultural and historical treasure from Paris to the world.”

Salma’s husband Francois-Henri is the chairman and CEO of Kering, an international luxury group which owns the likes of Gucci, Alexander McQueen, Stella McCartney, Saint Laurent and Balenciaga.

He is also the president chairman of Artemis, the holding company that controls the assets of the Pinault family. Francois-Henri’s 82-year-old father is reportedly worth an estimated $37.3 billion.

According to PEOPLE, Salma and Francois-Henri own a residence near the Notre-Dame cathedral.

The couple also tied the knot in Paris on February 14, 2009, at the City Hall of the Sixth Arrondissement – which is located near the iconic cathedral.

According to recent reports, donations to rebuild Notre-Dame have now surpassed €1 billion.