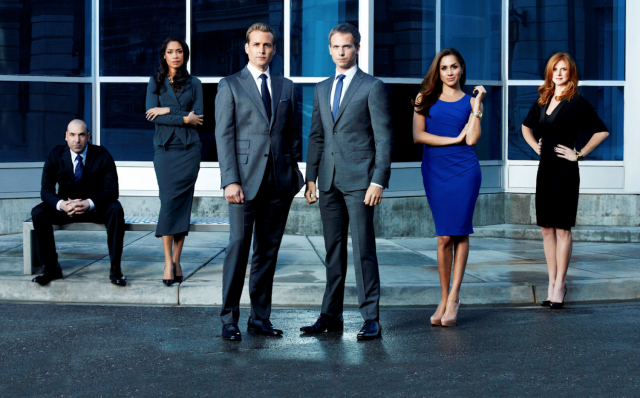 The American actress married Prince Harry in a fairytale wedding on May 19, and her former co-stars were lucky enough to bag an invite to St. George’s Chapel in Windsor.

Speaking to Entertainment Tonight, Sarah, who plays Donna Paulsen in the hit USA series, recalled, “It was a wonderful moment to get to see [Meghan] on that day and in that moment. It was special.”

“Seeing [Meghan] walk in on her own, in that moment before she met up with Prince Charles to walk the rest of the way, that was amazing.”

Our little moment before all those epic, unforgettable moments. Sending love and thanks to @olivierlapidusofficial @lanvinofficial and @philiptreacy for wrapping me up in your beautiful designs on this momentous occasion. 😘❤ #philiptreacy #lanvin

As for Gabriel, he revealed that his favourite moment was during the lunchtime reception after the wedding at St. George’s Hall, which was hosted by the Queen.

“It was surprising to see Elton John play ‘I’m Still Standing.’ He’s still standing, he was incredible and that was an incredible moment,” said Gabriel, who plays Harvey Spector in Suits.

“I think, overall, just to be a part of such an uplifting story, you know? A story of inclusion, love – and there’s so much stuff out there that’s so depressing and dark. This was just a remarkable day to go and support her and the royal family and it was an amazing time,” he added.

Congrats to Meghan and Prince Harry on your nuptials. Enjoyed meeting many of your family and friends and an incredible honor to be a part of the whole celebration. May your journey together be full of love and children. Cheers! #royalwedding #princeharry #meghanmarkle

Prince Harry asked Elton to perform after their wedding due to his close connection to his late mother, Princess Diana.

The singer was friends with Diana, and famously performed a rendition of his song “Candle In the Wind” at her funeral in 1997.

According to PEOPLE, Elton sang a number of his greatest hits – including Tiny Dancer, which he dedicated to the bride.