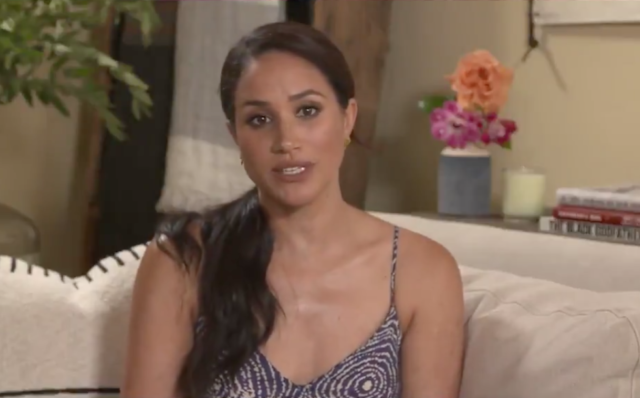 Meghan Markle has revealed why she made “a personal choice” to stay off social media.

The Duchess of Sussex was an avid Instagram user before she joined the British Royal family, but shut down her personal social media accounts in early 2018 – before she married Prince Harry.

After she officially joined the royal family in May 2018, the couple launched a joint Instagram account (@SussexRoyal) – but it was strictly managed by their social media team.

Harry and Meghan then abandoned the account earlier this year, when they stepped down as senior working members of the royal family.

Since stepping down from their roles, the couple are technically free to manage their own social media accounts – but Meghan has decided against being on social media “for her own self preservation”.

The former actress opened up about her decision during Fortune’s Most Powerful Women Next Gen Virtual Summit, and said she hasn’t been on social media “for a very long time”.

Meghan explained: “We had [an Instagram account] through the Institution and our office that was in the UK. But that wasn’t managed by us that was a whole team.”

“I have made a personal choice to not have any account, so I don’t know what’s out there and in many ways that’s helpful for me.”

“Something, algorithmically, is creating this obsession.”

Meghan, The Duchess of Sussex warns against the pitfalls of social media addiction during a conversation at the #FortuneMPW Next Gen Summit. https://t.co/hhyvMGAoyf pic.twitter.com/eKpB0U38AW

The mother-of-one then warned the audience about the “lasting effects” of social media by saying: “I don’t even think people have started to scratch the surface of what [social media] is doing to us.”

“Understand that it is not limited to that one moment, you are creating an echo chamber for yourself, so the more that you engage with things that are negative, not just for other people that you might not know, but what it’s doing to you as a human being.”

“It can really have lasting effects and that there is an alternative to engaging in that kind of stuff, so I would say just be really conscious and responsible,” she said.

Meghan also shared her concerns for people who have become obsessed with social media.

“There is something algorithmically that is in there that is creating this obsession that I think is very unhealthy for a lot of people.”

“I have a lot of concerns for people that have become obsessed with it and it is so much a part of our daily culture for so many people that it is an addiction.”

Meghan’s comments come after she recently opened up about being “the most trolled person in the entire world” while recording a podcast in honour of World Mental Health Day.