Lindsay Lohan has sparked serious concern, after she approached a refugee family on Instagram Live and accused them of “trafficking”.

The Instagram Live, which was uploaded on Saturday night, shows the actress following a family of four, who she describes as Syrian refugees.

In the video, Lindsay said: “Hey everyone, I just want to show you a family that I met, a Syrian refugee family that I’m really worried about. They really need help.”

Speaking in English but occasionally using Arabic words, Lindsay repeatedly asks them: “You want to come with me? Come with me, I’ll take care of you guys,” before asking a young boy, “Do you want to stay in a hotel tonight? Do you want to watch movies? It would be so cool to watch a movie on a TV or a computer.” 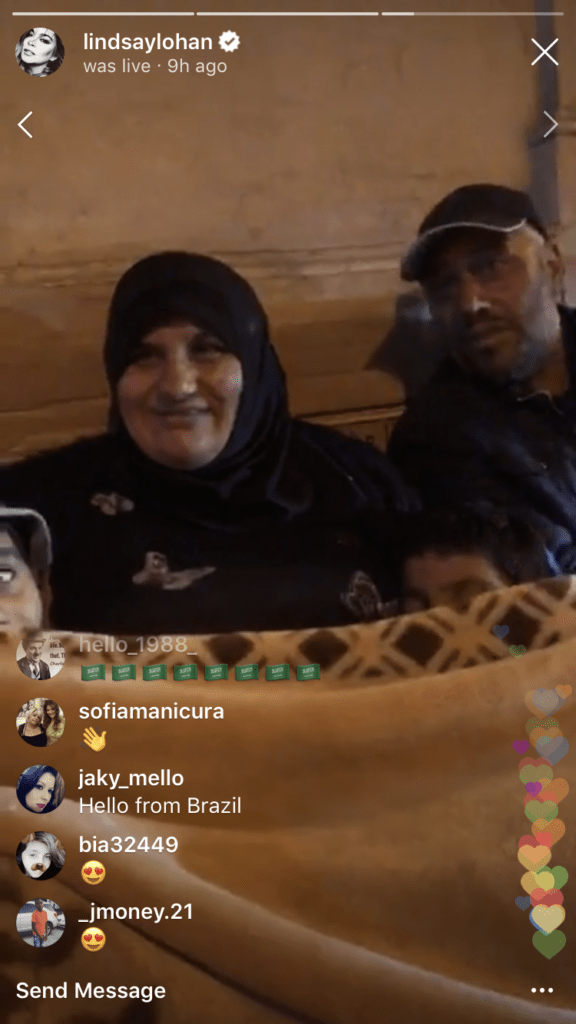 When the parents refuse Lindsay’s offer, the Mean Girls star tells the mother, “You should not have them [your sons] on the floor, you should be a hard-working woman and you should be doing what you [can] for your children, so they have a better life.”

“If someone is offering them a home and a bed, which is me at the moment, give it to them. They will come back to you.”

The situation appeared to take a turn when the family started walking away from Lindsay, who proceeded to follow them and say, “Look what’s happening, they’re trafficking children […] You’re ruining Arabic culture by doing this.”

what is happening… lindsay lohan tried to kidnap two refugee children because she thought the mom was trafficking her children she then was punched by the mother wow… pic.twitter.com/WYvchUqVNh

“You’re taking these children, they want to go. I’m with you boys, don’t worry, the whole world is seeing this right now.”

At the end of the video, an altercation appears to take place between Lindsay and the mother, and the actress ends up on the ground crying.

Just hours before the encounter, Lindsay appeared to have been out with friends in a nightclub.

Needless to say, people were pretty shocked by what they saw on Lindsay’s Instagram Live, and took to Twitter to express their concern.

Lindsay Lohan how’d you go from the club to trying to kidnap two kids on live? pic.twitter.com/IE7dGOpDi1

Lindsay Lohan’s IG live is one of the wildest things I’ve ever seen. She’s speaking gibberish in a fake accent and trying to take two homeless boys to a hotel room against their parents wishes. Their mom pushes her to the ground and then Lindsey cries into the camera.

Uhh Lindsay Lohan just posted an Instagram video of her trying to kidnap a boy in Russia.

Lindsay Lohan is straight garbage. Her IG live was hard to watch. She accused an innocent homeless Syrian family of trafficking. The mother is shook by Lindsay’s following them with their kids and she punched or slapped her. Shit is wild.

Lindsay Lohan literally harassed and followed that family, tried to grab one of the kids, got punched in the face then had the nerve to be like “Wha!? Omg I’m so scared right now!” Girl…how do you think they- pic.twitter.com/WpVbLCwb7q