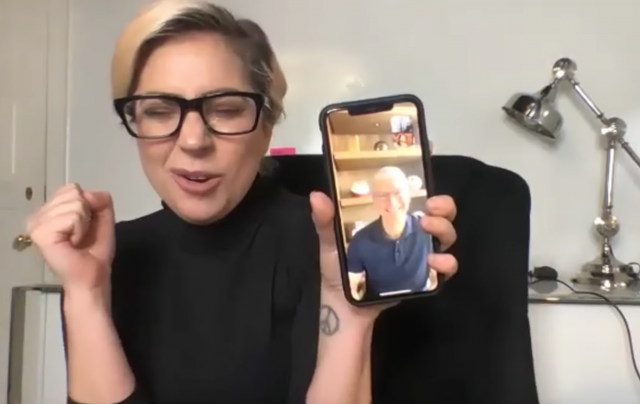 ‘One World: Together at Home’, which Gaga is organising alongside Global Citizen and the World Health Organisation, will take place on April 18.

The concert, which will feature major artists including Elton John and Billie Eilish, aims to raise money for coronavirus relief – and will air on the BBC on April 19.

Speaking about the concert on The Tonight Show with Jimmy Fallon, Gaga said she’s been taking part in fundraising efforts – and revealed they’ve already raised $35 million.

During the interview, Gaga decided to call up Apple’s CEO Tim Cook to secure a “sizeable” donation towards the charity.

Speaking to Tim, she said: “We spoke last night about a certain number for the donation, and it was quite sizeable. I just wanted to make sure that we were OK with that — can I confirm you for that donation?”

The tech giant’s CEO agreed, and Gaga joked, “My next single’s called ‘Tim Cook’. I’m putting it out tomorrow.”

Apple have since confirmed that they’re donating $10 million to the fund.