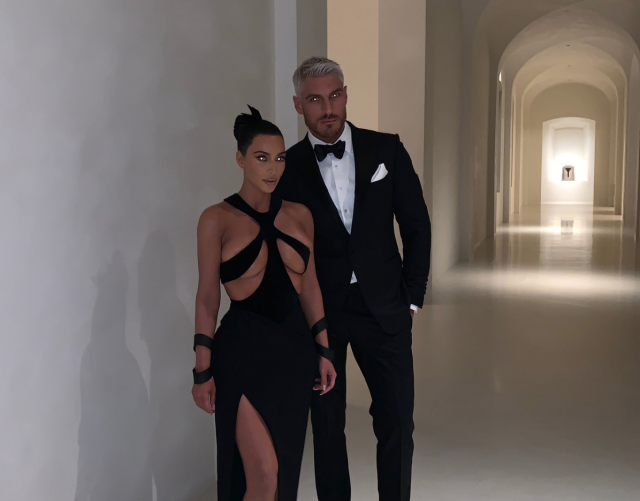 Kim Kardashian has sensationally slammed claims that she’s been ‘secretly collaborating’ with ‘fast-fashion’ brands in order to clone her unique outfits.

Instagram account Diet Prada recently alluded to a theory that Kim has been working with these brands, after Fashion Nova advertised a copy of Kim’s 1998 vintage Thierry Mugler gown just hours after she wore it to the Hollywood Beauty Awards on Sunday.

The account claimed that Fashion Nova knew what Kim was going to wear days beforehand, after model Yodit Yemane shared a video on Instagram from a photoshoot for the brand.

They alleged, “Fashion Nova Mugler knockoff shot 4 days before Kim wore it on 02/18/19. Kim, you’ll never fess up to your sneaky lil collaborations, but we got all the receipts…”

“At some point recently, a fast fashion photo shoot happened featuring a vintage Mugler dress that Kim just happened to wear on Sunday night to the Hollywood Beauty Awards…and yes, it appears to be a real dress, not photoshop…”

“Ahead of Fashion Nova releasing the dress at 9pm EST tonight, house model Yodit Yemane may or may not have accidentally leaked a story 2.5 hours earlier of photo options from her shoot featuring the Mugler replica…

“The file names were even labeled ‘Kim dress’ while it’s now being called ‘Winning Beauty Cut Out Gown’ lol… This begs the question: Did Fashion Nova whip up the dress overnight in their Los Angeles atelier after seeing Kim in it or is she peddling her vintage finds to mass retailers ahead of debuting them for a calculated, timely release?”

However, Kim has since hit back at these claims by posting a furious statement on Instagram. 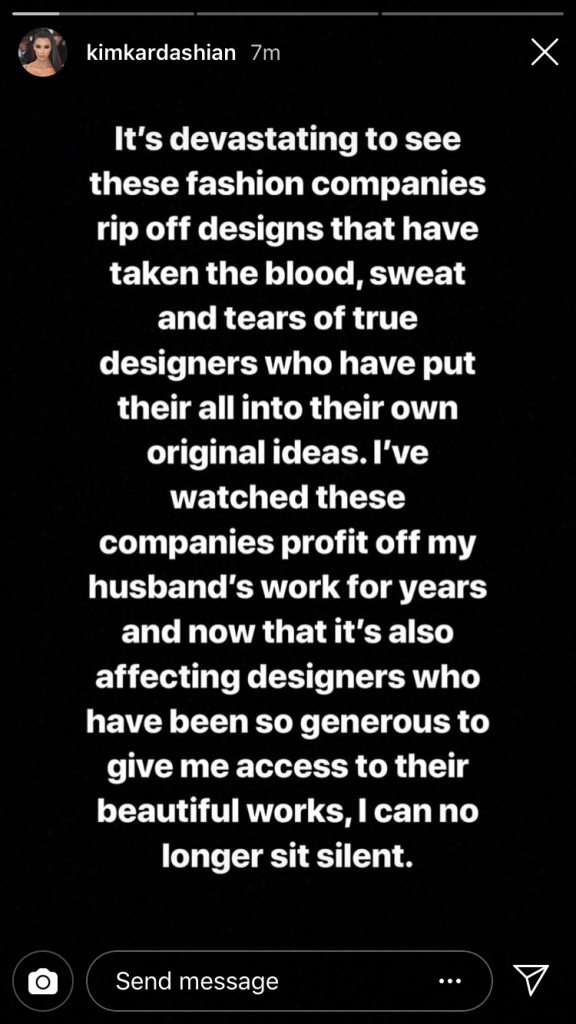 She wrote: “It’s devastating to see these fashion companies rip off designs that have taken the blood, sweat and tears of true designers who have put their all into their own original ideas.”

“I’ve watched these companies profit off my husband’s work for years and now that it’s also affecting designers who have been so generous to give me access to their beautiful works, I can no longer sit silent.”

“Only two days ago, I was privileged enough to wear a one-of-a-kind vintage Mugler dress and in less than 24 hours it was knocked off and thrown up on a site – but it’s not for sale,” Kim continued.

“You have to sign up for a waitlist because the dress hasn’t even been made to sell yet. This is a way to get people to sign up to their mailing list and make people believed there is some kind of relationship between me and this fashion site. There is not.” 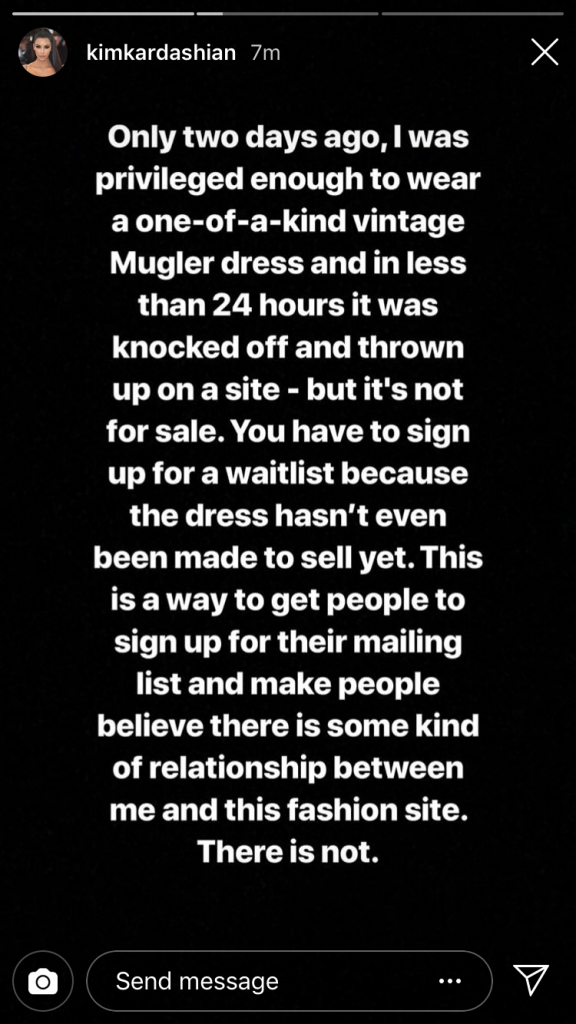 “My relationships with these designers are very important to me. It’s taken me over a decade to build them and I have a huge amount of respect for the amount of work that they put into bringing their ideas to life.

“I often plan for weeks, sometimes months, and even a year in advance, and I’m grateful for every fashion moment those designers and their dresses have helped me create.

“So, as always, don’t believe everything you read and see online. I don’t have any relationships with these sites. I’m not leaking my looks to anyone, and I don’t support what these companies are doing,” she added. 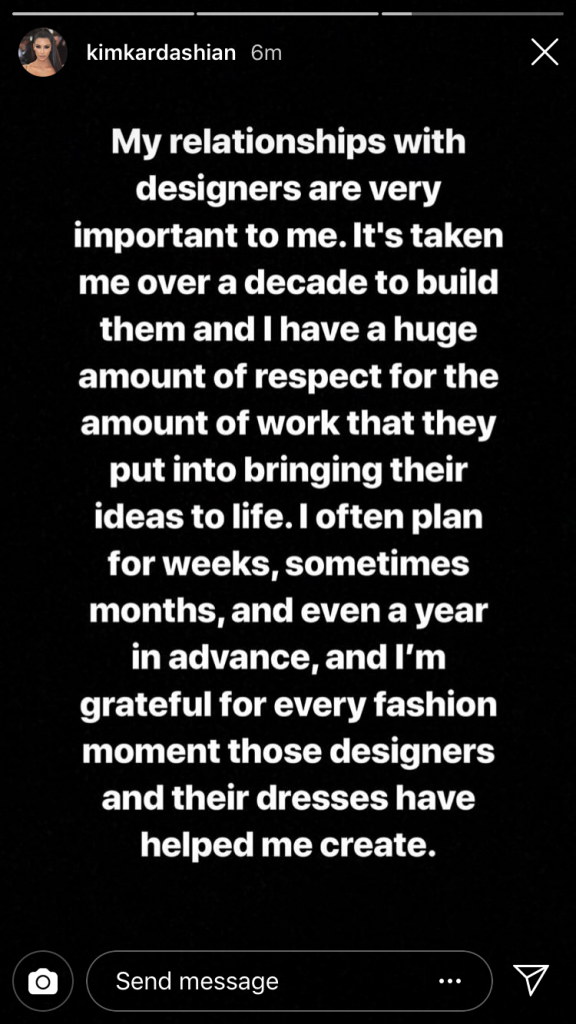 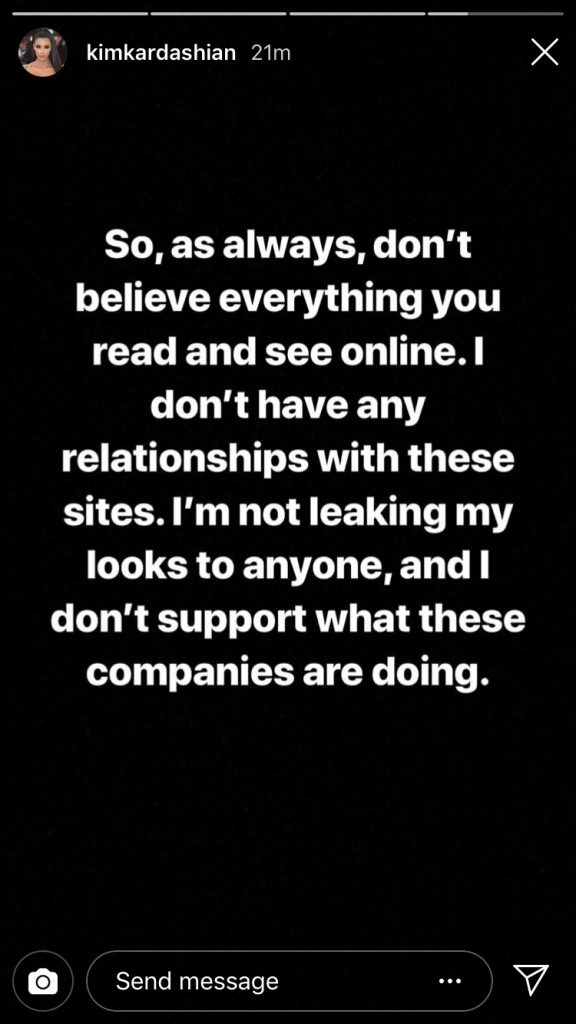 The Kardashian-Jenner clan’s outfits have long been ripped-off by online retailers, and Kim only recently begged them not to copy a unique design her husband Kanye West created for her – but they ended up doing it anyway.

And just last year, Kim revealed on Ashley Graham’s podcast, Pretty Big Deal, that Kanye gave her a cheque for $1million after she turned down a brand deal with a fashion brand.

Although Kim has distanced herself from these fashion brands – both her mother Kris Jenner and her sister Kylie Jenner have affiliated themselves with Fashion Nova in the past, by posting ads for the brand on Instagram.