Kim Kardashian has shared a sweet photo of her family – after she fiercely defended her husband Kanye West in a fiery Twitter rant.

The West family have been spending some time in Wyoming, where Kanye is currently working on new music.

Taking to Instagram, the mother-of-three shared a picture of her and her husband on a picturesque walk with their two eldest children — daughter North, 4, and son Saint, 2.

The reality star’s touching post came in the midst of her bitter Twitter feud with Rhymefest, a rapper and songwriter who worked with Kanye on his hit tracks ‘Jesus Walks’ and ‘New Slaves’.

On Friday, Canadian rapper Drake released a diss track, called Duppy Music, in which he had some harsh words for Kanye and Pusha T.

Drake released the track in response to ‘Infared’, a song from Pusha T’s new album DAYTONA, which Kanye produced, that accused Drake of allegedly using ghostwriters.

After releasing his diss track, Drake also shared an image of an ‘invoice’ for $100,000, which was addressed to Kanye’s music label, G.O.O.D. Music, for “promotional assistance and career reviving.”

In response to the diss track, Rhymefest tweeted, “I’m asking @Drake to help the part of Chicago Kanye has Abandoned!”

He then told Drake to contact Donda’s House, the non-profit organization dedicated to providing arts education for the youth of Chicago, which was named after Kanye’s late mother.

Responding to Rhymefest’s comments on Twitter, Kim wrote, “U haven’t been right since u got kicked out of the studio in Hawaii wearing fake Yeezy’s @RHYMEFEST ????.”

“You’re over leveraging Kanye’s name & asked Kanye to donate money to u so stop w your fake community politics & lies. Truth is you haven’t been able to sustain the foundation.” 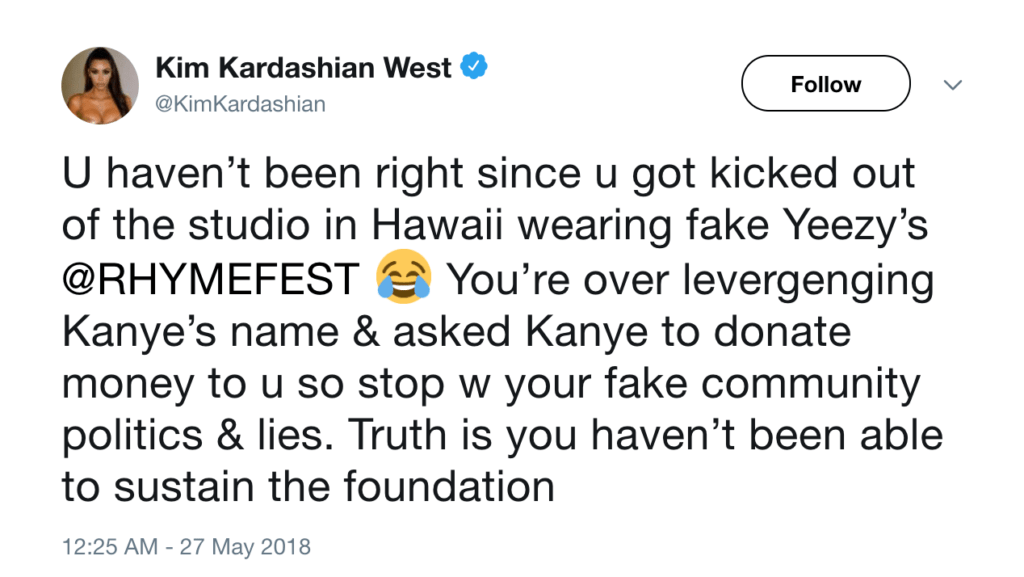 She continued, “I saw you at our studio a few weeks ago so why didn’t you bring this up then @RHYMEFEST? You were trying to get Kanye to listen to your sub par beats. You have the audacity to use Kanye’s mom name to try to shed a negative light on Kanye.”

“You better believe I will make it my mission to take Donda’s House from you and let me children run it the way it should be run!”

She added, “Oh and lastly your flight cancelled to Wyoming. You thought you were really worthy to be on this album ????????????. Sorry to all of my followers for flooding my timeline I know you have no idea who Rhymefest is.” 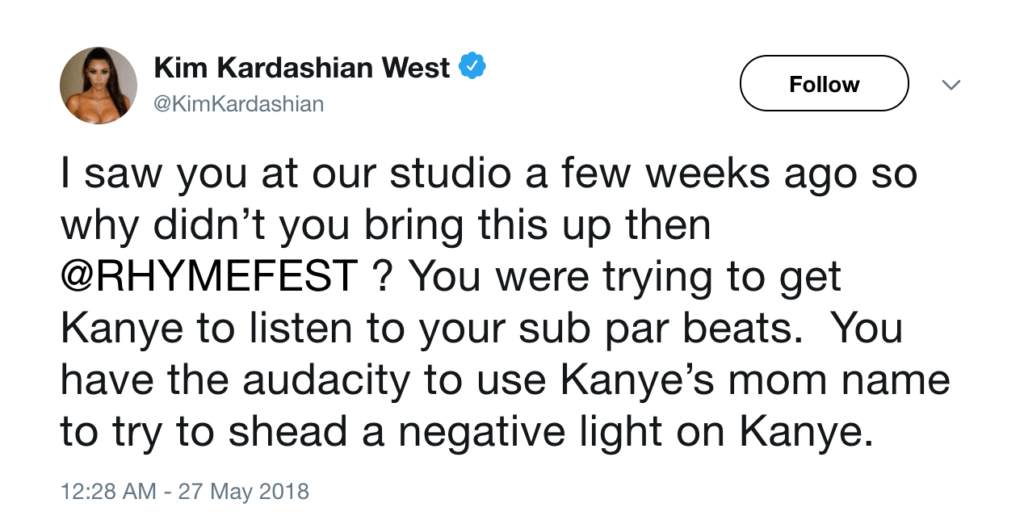 Responding to Kim’s tweets, Rhymefest wrote, “Kanye, asked me if I would come help with his album again. I wasn’t seeking Kanye…he was seeking me. I spoke to your husband about peace and balance, as well as about the work that we have been doing in Chicago regarding Donda’s House. He was more interested in his record.”

“At this point, if you and Kanye want us to dissolve the organization so that you can do the work, we welcome that. As we will continue from our home on the South Side of Chicago, to do what we can to support the community we’ve worked five years to build in spite of you & Kanye’s lack of interest or support.”

Hey @KimKardashian good to hear from you. Here’s my response pic.twitter.com/dWvwZfr1b5

Following the controversy, Donda’s House released a statement on social media confirming that the organisation had decided “to no longer use the name Donda’s House Inc.”

“This has been an incredibly difficult decision but the social media quotes from Kim Kardashian West, as well as the expressed interested of her family running the organization, has brought us to this decision,” the statement read.

After a lot of confusion, Kim decided to explain everything to her followers.

She tweeted, “Kanye and Donda started a charity called Loop Dreams. When Donda passed, they changed the name to Donda’s House. Kanye paid Rhymefest a salary to run it.”

“After several years of lack of performance from the organization and Kanye going through personal financial issues, he could no longer fund salaries. Rhymefest asked to take it over and Kanye agreed with no financial strings attached.” 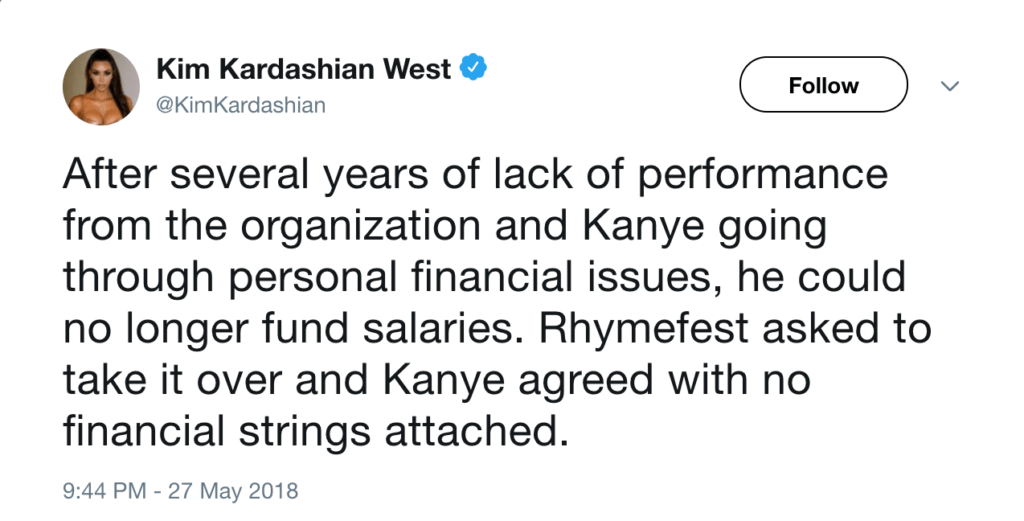 She continued, “Kanye gave his ‘friend’ an opportunity to run an organization on his own. So now that Kanye is being publicly shamed for not being involved makes no sense and, at this exact time, just seems very calculated.”

“I have and will always applaud any efforts to give back to the community. To fight for justice and to help uplift the youth. But I will never tolerate someone who was close to Kanye who attempts to use his late mother’s name to publicly shame him while pretending to do good.”

The KUWTK star concluded, “I will always ride for my man!” 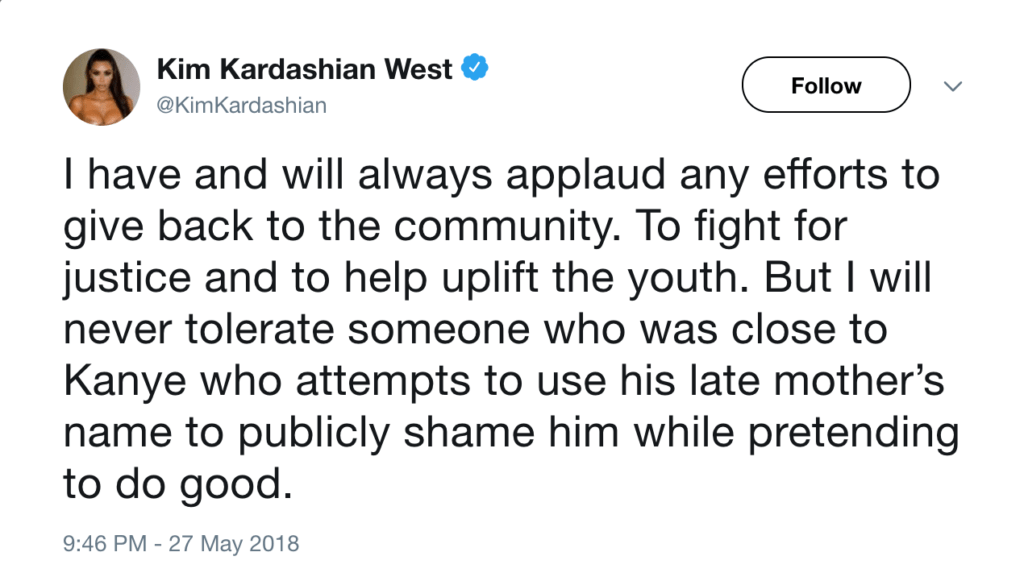