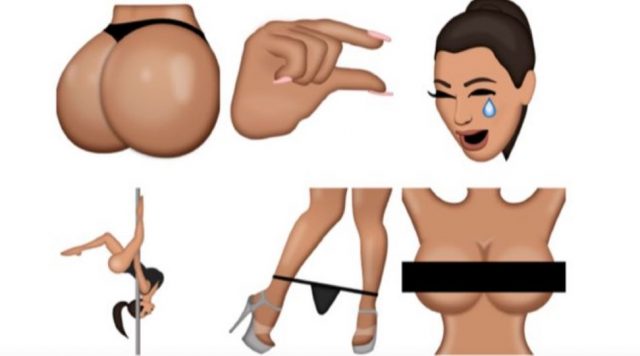 Kim Kardashian is getting massive backlash for trying to profit from feminism with her new ‘Kimoji’ pack.

The reality TV star is being criticised because last year she wouldn’t call herself a feminist and now fans claim she’s only on board with the movement to make money from it.

Her ‘Kimoji’ packs include exclusive emojis people can download and her ‘feminist’ themed one costs $2.99.

It includes phrases like ‘GRAB AMERICA BACK’ and slogans people take less issue with like ‘MY BODY, MY CHOICE’.

However fans are outraged by the majority of the content of the ‘Kimoji’ pack.

Kim Kardashian thinks this is what women’s empowerment looks like.

Some have called it a ‘slap to every women who has stood to fight for our rights.’ Going on to say it lacked class to use the girl power Anne Frank, Malala Yousafzai and Rosa Parks fought for to make a quick buck.

Women’s Empowerment emojis is a slap to every women who has stood to fight for our rights. I’m sure #AnnFrank #MalalaYousafzai #rosaparks fought for us all so u can use girl power to sell this…All Class pic.twitter.com/eJsJ4dV8PZ

Fans went as far as to call her opportunistic and while some genuinely wondered if she had become a feminist the last year most assumed were motives for associating with the movement were financially driven.

So Kim Kardashian only became a feminist once she could market it with #KIMOJI pic.twitter.com/HFXnNZqrOv

Others accused her of being greedy for trying to make money from the movement.

Wow. #KimKardashian is selling “women empowerment” emojis. This is her “feminist movement”.Im sorry but dancing on a stripper pole & showing tits and ass is NOT EMPOWERING WOMEN! WTF is happening?Does anybody else see that she’s trying to cash in on a movement right now? #greed pic.twitter.com/KpllBYmvPr

Kim wrote an essay in 2016 denying the feminist label. Speaking to Harper’s Bazaar Arabia in 2017 she claimed that she did ‘a lot more than people that claim that they’re feminist’.

‘To clarify what I said before: I feel in my soul I’m a feminist. I just don’t need labels to make me feel or know what I am inside.’

While there’s no official word yet from the Kardashian household if they are ‘bible’ feminists, they have misstepped massively in the past when attempting to profit from appearing to be woke.