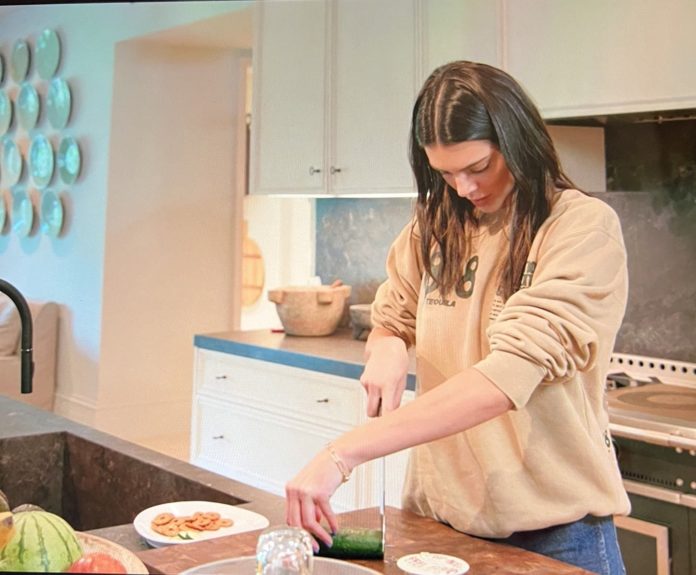 A clip of Kendall Jenner cutting a cucumber has gone viral.

In the latest episode of The Kardashians, which joined Disney+ on Thursday, the model visited her mom Kris Jenner’s new home and decided to make herself a healthy snack.

However, after the 26-year-old begins awkwardly slicing a cucumber with the knife precariously close to her fingers, Kris suggests getting her chef to cut the vegetable instead.

The way Kendall Jenner cut that cucumber will haunt me pic.twitter.com/K0mBmvkzHu

Kendall declines the offer, and then confesses to the cameras that she isn’t good at chopping.

Taking to Twitter to react to the scene, one viewer tweeted: “anytime you feel like you’re bad at doing something, watch kendall jenner chop a cucumber.”

Another wrote: “Kendall Jenner trying to cut a fcking cucumber is the most tragic thing I’ve ever witnessed.”

Kendall Jenner trying to cut a fcking cucumber is the most tragic thing I’ve ever witnessed #TheKardashians pic.twitter.com/QNoJMHXzJD

NO WHY IS KENDALL CUTTING THE CUCUMBER LIKE THIS 😭 #TheKardashians pic.twitter.com/gK9eb1s5zr

anytime you feel like you're bad at doing something, watch kendall jenner chop a cucumber😭

I would say the biggest moment of this week's #Kardashians episode is watching Kendall cut cucumbers in the weirdest way possible. 😳 pic.twitter.com/UDyEXKvaM4

I just saw Kendall Jenner attempt to cut a cucumber on the Kardashians and girl why you holding it like that 😭 pic.twitter.com/JTyhNgwiiJ

Kendall not knowing how to properly cut a cucumber is sending me #TheKardashians pic.twitter.com/18NokUo4c1

Stop why does Kendall not know how to chop a fucking CUCUMBER.

Kendall later quote tweeted someone who was mocking her cucumber cutting skills, and wrote: “tragic!”

New episodes of The Kardashians air every Thursday on Disney+.