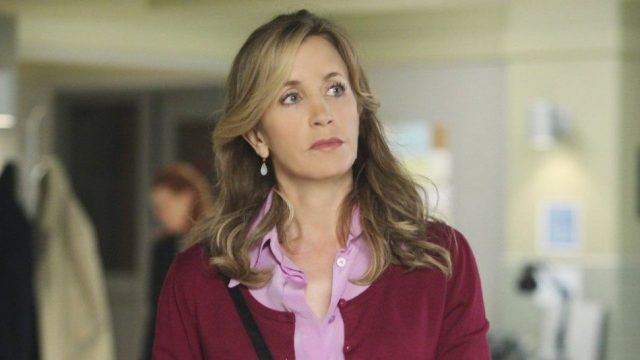 Nearly two months after she was arrested, the former Desperate Housewives star pleaded guilty in a Boston courtroom on Monday.

According to NBC News, the actress won’t be sentenced until September – but prosecutors recommended a sentence of four months in prison.

Felicity was one of nearly 40 individuals charged in connection with an alleged college entrance exam scheme back in March.

According to court documents, the actress reportedly made a “charitable contribution” of $15,000 to participate in the scheme, on behalf of her eldest daughter.

Felicity, who was ‘secretly’ recorded discussing the scheme with a co-operating witness, was charged with conspiracy to commit mail fraud and honest services mail fraud.

After the scandal hit headlines, Felicity said: “I am in full acceptance of my guilt, and with deep regret and shame over what I have done, I accept full responsibility for my actions and will accept the consequences that stem from those actions.”

“I am ashamed of the pain I have caused my daughter, my family, my friends, my colleagues and the educational community. My daughter knew absolutely nothing about my actions, and in my misguided and profoundly wrong way, I have betrayed her.”

“This transgression toward her and the public I will carry for the rest of my life. My desire to help my daughter is no excuse to break the law or engage in dishonesty.”

According to court documents, the pair allegedly “agreed to pay bribes totalling $500,000 in exchange for having their two daughters designated as recruits” to the University of Southern California (USC) rowing team.

However, it’s believed Lori and Mossimo plan to fight the charges, after the pair pleaded not guilty to the charges made against them last month.

Meanwhile, William “Rick” Singer has been charged for running the alleged scheme through his company Edge College & Career Network.

Back in March, the 58-year-old pleaded guilty to charges including money laundering, racketeering, and obstruction of justice.

William is set to be sentenced in June, and he could face a maximum of 65 years in prison.