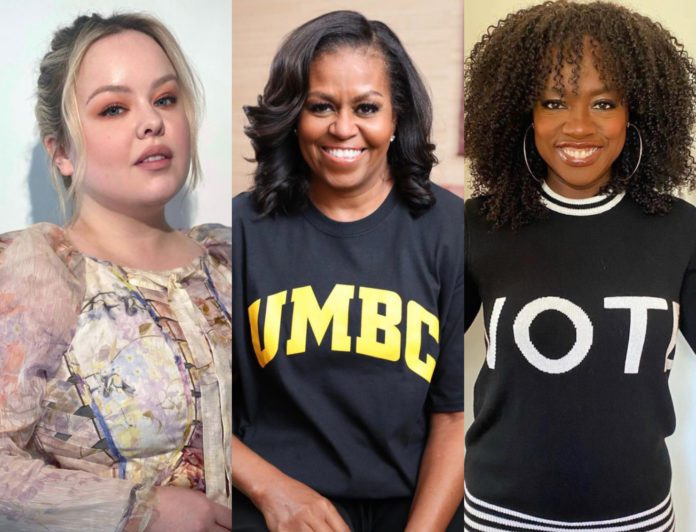 This decision leaves it up to individual states to decide whether to allow abortions there, and will most likely lead to all but total bans on the procedure in nearly half the country.

The 6-3 ruling, which will completely change the landscape of women’s reproductive rights in the US, has sparked outrage worldwide – and many famous faces have condemned the decision online.

President Joe Biden, in an address after the U.S. Supreme Court overturned Roe v. Wade, says “the health and life of women in this nation are now at risk.” https://t.co/J8Mr28yjUt pic.twitter.com/Doj8HSk00k

In an emotional statement, former First Lady Michelle Obama said: “I am heartbroken today. I am heartbroken for people around this country who just lost the fundamental right to make informed decisions about their own bodies.”

“I am heartbroken that we may now be destined to learn the painful lessons of a time before Roe was made law of the land, a time when women risked losing their lives getting illegal abortions.”

“A time when the government denied women control over their reproductive functions, forced them to move forward with pregnancies they didn’t want, and then abandoned them once their babies were born.”

“That is what our mothers and grandmothers and great grandmothers lived through, and now here we are again… This moment is difficult, but our story does not end here. It may not feel like we are able to do much right now, but we can. And we must.”

My thoughts on the Supreme Court’s decision to overturn Roe v. Wade. pic.twitter.com/9ALSbapHDY

Actresses Keke Palmer, Sophia Bush, Ariana DeBose and Viola Davis were also among famous faces who reacted to the news on Twitter.

Keke tweeted: “I’m past disgusted w/ my country and their constant inability to protect one another’s right & keep their word. How u overturning the wrong things? So many things to overturn that make sense. But this is what you chose??”

Sophia wrote: “They will never end abortion. Only safe abortion. This is not about life. It’s about control. Those motherf–kers.”

Viola penned: “And so it goes….Gutted. Now more than ever we have to use our voice and power! WE the people.”

And Ariana simply commented: “I have nothing nice to say at this moment in time.”

And so it goes….Gutted. Now more than ever we have to use our voice and power! WE the people……🙏🏿🙏🏿https://t.co/8gFi0AbNSQ

“Governments have no place telling people what to do with their bodies,” the Galway native added, before asking her followers to donate to Planned Parenthood.

The decision comes a month after a 98-page opinion obtained by ‘Politico’ — allegedly authored by Justice Samuel Alito and leaked to the press in a major breach of confidentiality — stated that “Roe was egregiously wrong from the start.”

The draft document, labeled as the “Opinion of the Court,” also said: “We [the Supreme Court majority] hold that Roe and Casey [another ruling on the right to abortion from 1992 which upheld the previous court decision] must be overruled.”

“It is time to heed the Constitution and return the issue of abortion to the people’s elected representatives.”

Roe v Wade was a landmark decision of the U.S. Supreme Court on January 22, 1973, in which the Court ruled that the Constitution of the United States generally protects a pregnant woman’s liberty to choose to have an abortion.

The Supreme Court’s move to overturn Roe v Wade has sparked outrage worldwide, and hundreds have already gathered outside the Capitol building in protest.

We’re live outside the Supreme Court after the nation’s highest court ruled to overturn Roe v. Wade and the fundamental right to abortion that has been the law for almost 50 years. https://t.co/bRjazATtOo

Prior to the verdict, Elizabeth Nash, state policy analyst at the Guttmacher Institute, a research group focused on abortion rights, told PEOPLE that the country will likely “start to see states, particularly the South, the Plains and Midwest, look to adopt abortion bans.”

Twelve states, including Mississippi and Texas, already have “trigger” laws in place that would automatically ban abortions.

“And that would make it very hard for a large percentage of women in the country to access abortion care in their own state. It means a lot more people would have to travel for care,” Nash said.

Does that mean abortion will become illegal? Here’s what you need to know about the ruling https://t.co/5xc1nrrsMj pic.twitter.com/E3lrKjCNN2

“And the people who are most impacted by these abortion restrictions and bans are people of color, low-income individuals, young people and LGBTQ individuals — people who are already burdened with insufficient access to healthcare.”

There are, however, other efforts to maintain the right to abortion.

States like New York, California, Hawaii and Washington have statutory protections for abortion rights in their laws.