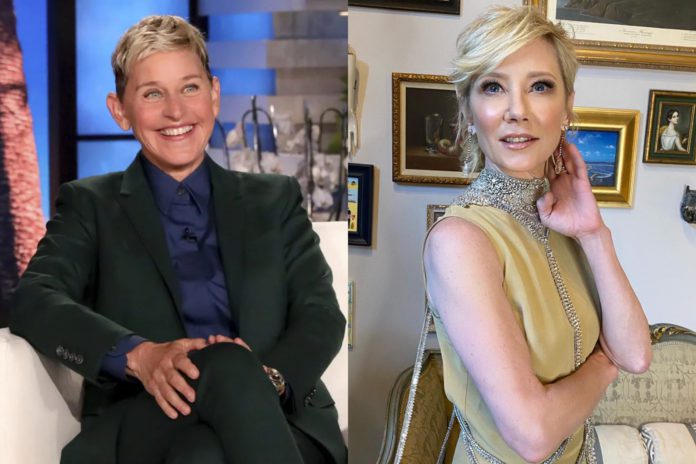 Ellen DeGeneres has paid tribute to her ex Anne Heche after her tragic death.

On Friday, the actress’ family confirmed she had passed away aged 53 after a horrific car crash last week.

After news of Anne’s passing surfaced, Ellen tweeted: “This is a sad day. I’m sending Anne’s children, family and friends all of my love.”

After news of the car crash broke, Ellen previously revealed that the former couple, who dated from 1997 to 2000, were no longer in contact.

In a video shared by the Daily Mail, Ellen was asked if she had spoken to Anne since the horror crash.

“Do you wanna send her any well wishes?,” the cameraman asked, to which Ellen replied: “Sure, I don’t want anyone to be hurt.”

Anne slipped into a coma after her blue Mini Cooper crashed into a Los Angeles home and went up in flames last Friday.

On Thursday night, the actress’ rep told press outlets: “Unfortunately, due to her accident, Anne suffered a severe anoxic brain injury and remains in a coma, in critical condition.”

“She is not expected to survive. It has long been her choice to donate her organs and she’s being kept on life support to determine if any are viable.”

“Anne had a huge heart and touched everyone she met with her generous spirit. More than her extraordinary talent, she saw spreading kindness and joy as her life’s work — especially moving the needle for acceptance of who you love,” her rep added.

“She will be remembered for her courageous honesty and dearly missed for her light.”

At the time of her crash, an LAFD report stated: “59 firefighters took 65 minutes to access, confine and fully extinguish the stubborn flames within the heavily damaged structure.”

“One female adult (was) found within the vehicle, who has been taken to an area hospital by LAFD Paramedics in critical condition.”

The LAFD also confirmed that the vehicle had driven 30ft into a residence, but that the home’s occupant had escaped without injury.

However the building was left “uninhabitable”, according to spokesman Brian Humphrey.

Anne is known for films including Donnie Brasco, Cedar Rapids and the 1998 Psycho remake.