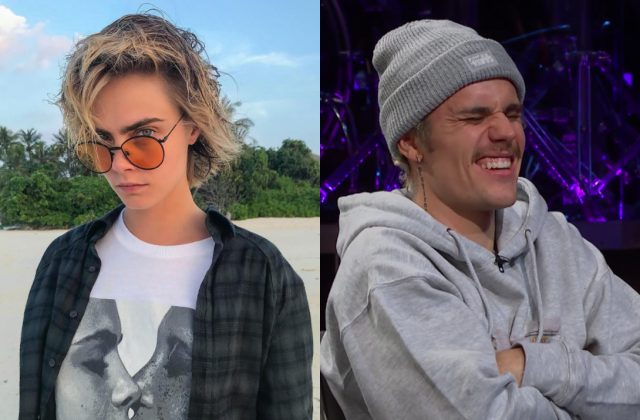 Cara Delevingne has hit back at Justin Bieber, after he ranked his wife Hailey’s famous friends.

During a game of Spill Your Guts or Fill Your Guts on The Late Late Show with James Corden, Justin was asked to rank three of Hailey’s friends from favourite to least favourite.

The 25-year-old had to rank Hailey’s pals Gigi Hadid, Kendall Jenner and Cara Delevingne, or else eat a piece of bull penis.

“I have nothing against those people, it’s just I have a better relationship. …I don’t want to eat a bull’s penis,” he added.

Although Justin insisted there’s no bad blood between them, Cara has suggested otherwise, as she revealed the singer has her “blocked” on Instagram.

Posting a clip from the show on Instagram alongside old photos of them hanging out, Cara wrote: “Now vs. Then. If you have nothing against me, then why don’t you unblock me? Love you @haileybieber – he should have just eaten the bull penis.”

Now vs. Then If you have nothing against me, then why don’t you unblock me? Love you @haileybieber – he should have just eaten the bull penis.

It’s not clear why Justin apparently has Cara blocked on Instagram, but the pair did fall out last year when he defended his manager Scooter Braun amid his ongoing feud with Taylor Swift.

Their feud kicked off when Taylor learned that Scooter had purchased Big Machine Label Group, and took issue with the idea of him owning the master recordings of her earlier work.

At the time, Justin’s wife Hailey commented “Gentlemen” under her husband’s post, but then Cara took a swipe at the pair by commenting, “Gentleman? @haileybieber @justinbieber you must be bored.”

“I wish you spent less time sticking up for men and more time trying to understand women and respecting their valid reactions,” she continued.

“As a married man, you should be lifting women up instead of tearing them down because you are threatened. I am not sure you actually understand what an apology is. This issue that @taylorswift is talking out is about far more than a picture and you know that.”

“As you said, you haven’t spoken to her in years which means you definitely don’t understand the situation. I do.”

“Take a step back and try to learn from this,” she concluded.

The Paper Towns actress then took to her Instagram Story to upload a screenshot of her comment, tagging Taylor with a simple tagline saying “love you.”