Ariana Grande has apologised to her fans, after a homophobic protest took place outside her concert in Atlanta over the weekend.

The singer’s fans were approached by two male protesters outside the State Farm Arena, who held up a rainbow banner with the word Pride crossed out.

In videos posted on social media, fans retaliated against the protestors, and forced them to leave.

fuck these dudes outside the Ariana Grande concert spreading homophobia and being fucking stupid and it took EVERYTHING in me not to kick him in the balls with me heels on pic.twitter.com/ukd3wIvrMz

After noticing videos on Twitter, Ariana responded by tweeting: “Man… saddened but not surprised by this one bit. i’m so sorry any of my fans had to encounter this.”

“we will do our best to ensure this doesn’t happen again. proud of u all for not fighting / engaging violently. never worth it. wishing him peace & a healed heart cause girl yikes.” [sic] 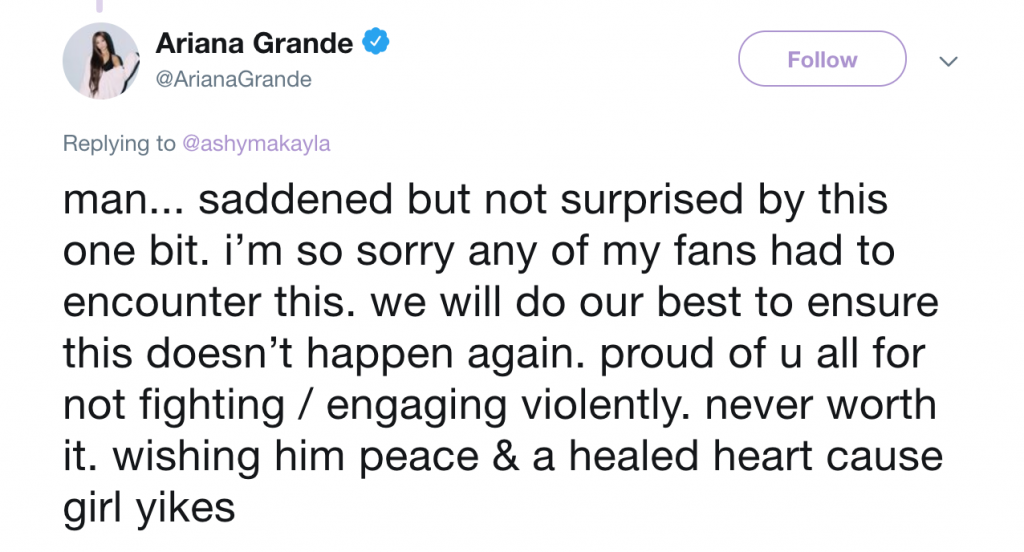 She added: “he is highly outnumbered. you are all so celebrated and loved and safe. also, he was doing the be alright choreo in his garage later that night, i promise.”

The news comes ahead of Manchester Pride on August 25, which Ariana is set to headline alongside Years & Years and Bananarama.