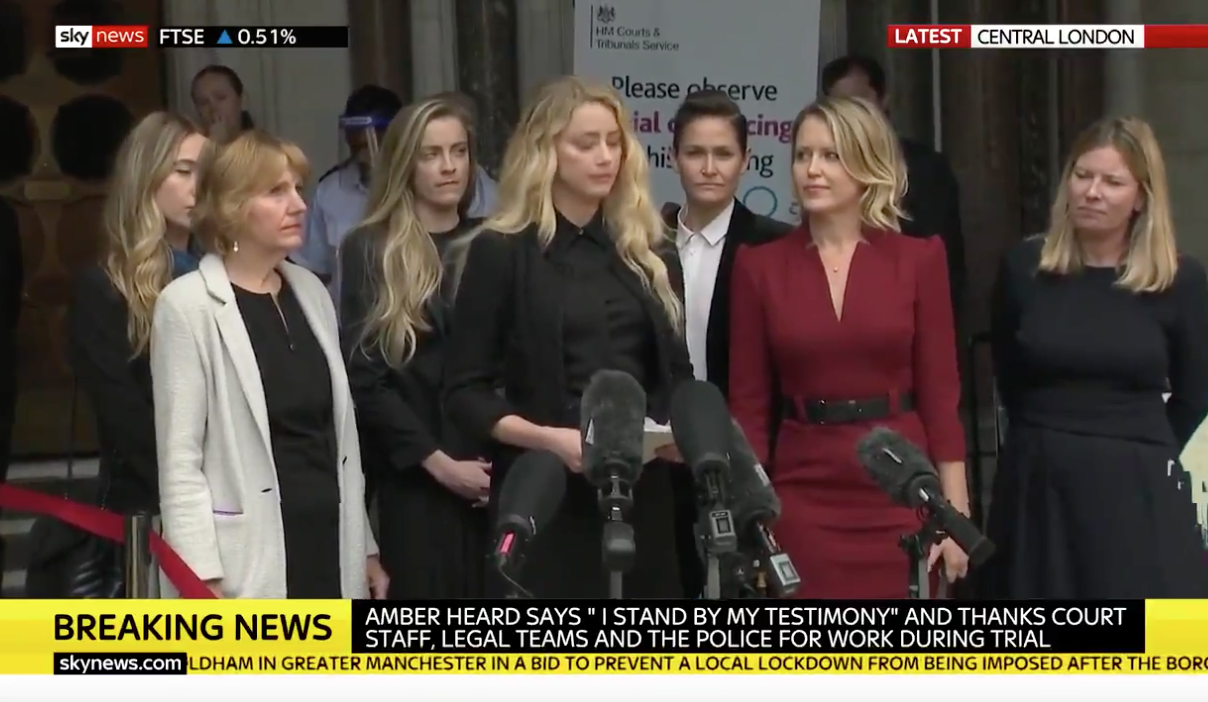 Amber Heard has released a statement following the last day of Johnny Depp’s libel trial against The Sun.

The actress was called as a witness in the trial by News Group Newspapers, who Johnny is suing over a 2018 article published by The Sun which labelled him a “wife beater.”

The actor has vehemently denied being physically abusive towards his ex-wife, but News Group Newspapers have defended the article’s publication by trying to prove that he was.

After the case came to a close today, Amber gave a speech outside the courthouse, and  described the past three weeks as “incredibly painful”.

BREAKING: Amber Heard says she “would have preferred not to be here in court” in a speech outside the High Court in London.

Amber also shared a statement on Instagram, reflecting what she said in her speech.

She wrote: “I travelled to the UK to testify in these proceedings as a witness to assist the Court.”

“After obtaining a restraining order in 2016 and finalizing our divorce, I wanted to move on with my life. I did not file this lawsuit and, despite its significance, I would have preferred not to be in court.”

“It has been incredibly painful to relive the break-up of my relationship, have my motives and my truth questioned, and the most traumatic details of my life with Johnny shared in court and broadcast around the world.”

“I stand by my testimony in court and I now place my faith in British justice.”

“I appreciate the dedication, hard work and support of the defence legal team, as well as my UK and US lawyers,” she continued.

“I also wish to extend my thanks to the very kind and diligent court staff and the police, who have been so sensitive in ensuring my protection so that that I could testify in safety.”

“And finally, my heartfelt thanks for the tremendous outpouring of support and the many messages I have received from around the world. You have given me so much strength and I send it back to you,” the post finished.

The lawyer claimed Amber changed her story and relied on unreliable witnesses to back up false claims.

The barrister claimed Amber had been a “wholly unreliable witness” and a “compulsive liar” throughout the case.

“The truth is that Mr Depp is not a violent man by nature at all,” he told the court, “He has never hit a woman in his entire life. Period. Full stop.”

He added that The Sun’s article left “no room for doubt at all” and acted “as both judge and jury”, with the article resulting in the loss of Johnny’s reputation.

Earlier in the trial, the lawyer claimed that the 2018 article made “defamatory allegations of the utmost seriousness” against the actor, accusing him of “inflicting such serious injuries that she feared for her life”.

“The articles amount to a full-scale attack on the claimant as a ‘wife beater’, guilty of the most horrendous physical abuse,” he added.

“The author deploys a panoply of cultural and topical references – namely the #MeToo movement, the Time’s Up movement and the disgraced film mogul and serial abuser of women Harvey Weinstein – in order to convey the seriousness of what the claimant is alleged to have done.”

In court last week, Amber described her ex-husband as “generous and loving” when he was sober – but said “the other side of him was a monster”.

“I was so in love with Johnny at that time. We had had a wonderful year together where he was sober and clean and that is how I got to know him,” she explained.

“And Johnny, when he was like that, (is) generous, loving, he is a remarkable man when he is like that.”

“I loved him and I didn’t want to lose that… the other side of him was a monster, but I always held out hope that he would get clean and sober,” she claimed.

Amber also told the court that she endured physical and psychological violence from her ex-husband when he fell into a “drug and alcohol binge” during a 2015 trip to Australia.

Johnny denied claims he abused Amber during the trip, and accused her of severing his finger by throwing a vodka bottle at him.

“Amber severed my finger with the second of two thrown vodka bottles at me in the early afternoon of Sunday March 8,” he claimed.

“Amber claims this was on the second day of a ‘three-day hostage situation’. Amber claims that during these three days, I subjected her to a variety of what sounds like torture and other abuse. These sick claims are completely untrue.”

“In the tapes of my conversations with Amber that have now been disclosed, it is clear that Amber spoke to me as an aggressor, and not as she has described herself, someone who feared for her life,” his witness statement read.

“The hours of recordings reveal the true nature and dynamic of our relationship, including Amber’s confessions of serial violence against me.”

“The threat that nobody will believe I am a victim of domestic violence, and her own acknowledgement that she could not control her violence.”

During court proceedings, Johnny said he felt manipulated by his ex-wife, and alleged that she faked having the same interests as him – because he was an “easy target”.

After three weeks of evidence, the hearing is now over.

The judge’s ruling will come at a later date.