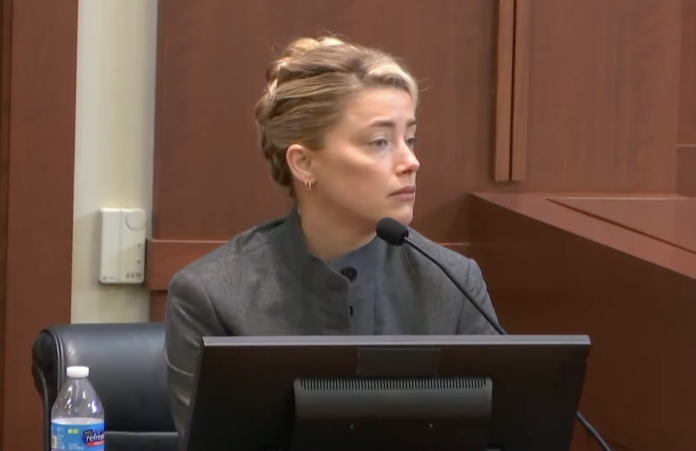 Amber Heard has claimed her ex-husband Johnny Depp assaulted her on their honeymoon.

After a week-long break, the actress returned to the witness stand in their highly-publicised libel trial at Fairfax County Courthouse in Virginia on Monday.

On her third day of testimony, Amber alleged Johnny slammed her against a wall and wrapped a shirt around her neck during their honeymoon on the Orient Express in July 2015, shortly after he finished filming the fifth Pirates of the Caribbean movie.

In a sleeping car on the train, the 36-year-old claimed her now ex-husband slapped her across the face and repeatedly slammed her body against a wall.

She also alleged Johnny took his shirt off and wrapped it around her neck.

Amber said: “That’s how I woke up the next morning. I woke up with it still around my neck and a giant knot on the back of my head.”

On day 16 of the trial, Amber detailed multiple incidents of alleged abuse, and told the court: “Violence became normal towards the end [of the relationship with Johnny Depp].”

“It’s hard to say now, but the brain does with trauma what it does – puts it away as best it can.”

Amber recalled one incident that allegedly took place on 21 May 2016, when the actress claims Johnny threw a phone at her face.

The court was shown a series of photos of Amber’s face looking red and blotchy, which were taken by her friend Rocky Pennington and shown to officers as evidence earlier in the trial.

Amber said her friend took the photos after the incident to “protect” her, and said: “We didn’t know what Johnny was going to do, so [Rocky] wanted to protect me.”

Earlier in the trial, Johnny testified that he never hit his ex-wife, and claimed that she was the abuser in their relationship.

The 58-year-old said the allegations he was a “drunken, cocaine-fueled menace who beat women” have cost him “everything”.

You can watch a live feed of the trial below: