A look back at Pete Davidson’s star-studded dating history 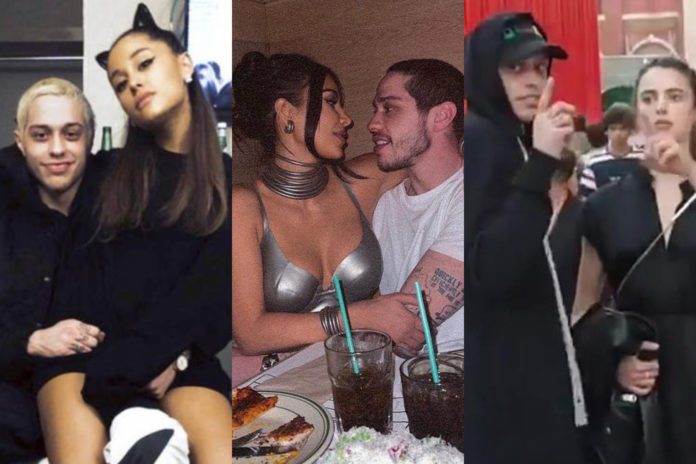 The couple’s relationship appeared quite serious despite their short time together.

However, his romance with the reality star isn’t the first of its kind.

The couple began dating in May 2016, but they called time on their relationship two years later.

The comedian confirmed the news to Complex at the time, saying: “We’re not together anymore. Very talented girl, she’ll be great and she’ll be fine. Yeah, I think she’ll be OK.”

In a 2020 collection of essays titled ‘No One Asked for This,’ Cazzie explained that her former beau broke up with her the day prior to when she found out he was dating popstar Ariana Grande – however, she revealed that they’ve moved on and remain friends.

One of Pete’s more notable romances was with Ariana Grande.

Their whirlwind romance began in May 2018, just after her broke things off with Cazzie.

The couple got engaged just weeks later, but the pair soon called it quits in October 2018 after just five months together.

The comedian covered up a neck tattoo he had dedicated to the ‘7 rings’ songstress.

Pete rebounded from his whirlwind relationship with Ariana to actress and model Kate Beckinsale.

The couple were first romantically linked in January 2019, after they were spotted flirting at a Golden Globes after party.

A source described their PDA to Page Six as a “f**k you to Ariana.”

However, Pete and Kate, who have a 20-year age gap between them, ended their brief romance in April 2019.

The couple were spotted on a romantic trip in Venice while the actress was promoting her film ‘Serberg’ ahead of the Venice Film Festival.

However, the pair soon called time on their romance and parted ways in October.

Margaret’s mother, actress Andie MacDowell previously said of their relationship: “She has a beautiful relationship with him but I don’t want to step on her relationship too much.They have a nice relationship.”

Pete Davidson and Margaret Qualley are spotted together in Venice https://t.co/01o0FmMwFh pic.twitter.com/rfeDOt9ArK

Page Six reported at the time that her parents hoped their romance would “fizzle out”.

In January 2020, it was announced that they had parted ways while the comedian had been admitted to a rehab facility amid struggles with his mental health.

Pete then confirmed their breakup in February, as he explained: “She’s very young, and I’m f**king going through a lot and it was before I went to rehab. It just wasn’t the right place or the right time at all.”

Kaia Gerber and Pete Davidson on a date last night, in Malibu. 🤔 pic.twitter.com/vB1rfjaKKE

Pete has denied he ever dated Olivia O’Brien, however she claims that they dated in October 2020.

In June 2022, the singer alleged on the ‘BFFs’ podcast that she had a brief fling with the comedian which she didn’t think “anyone knew about.”

Olivia also claimed he cooled things off with her via text: “He texted me and was like, ‘I’m seeing someone else. So, like, I can’t.’”

A rep for Pete denied her claims, stating: “There is no truth to this. They were friends and hung out a few times.”

Rumours began swirling of their romance in March 2021, after the comedian flew to the UK to spend time with her.

In April, Pete appeared to confirm that they were in a relationship.

However, their romance was short-lived and the couple broke up in August 2021 after spending just five months together.

The couple made their Met Gala debut together in 2022, and Pete made his debut on Hulu’s ‘The Kardashians’ in the trailer for season 2.

The comedian had multiple tributes to his girlfriend tattooed on him – including the words “jasmine” and “aladdin”, a tribute to the beginning of their romance, a tattoo which reads “my girl’s a lawyer,” and another which reads “KNSCP”, seemingly a tribute to Kim and her four children North, 9, Saint, 6, Chicago, 4, and Psalm, 3, whom she shares with her ex-husband Kanye West.

The pair enjoyed a nine-month-long whirlwind romance before they called time on their relationship in August.

You can read a complete timeline of Kim and Pete’s romance here. 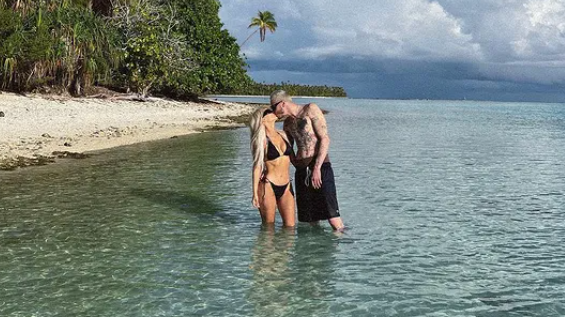