It was all hands on deck as Angela’s Ashes The Musical officially launched on Tuesday 25 April on the M.V Cill Airne, ahead of the shows summer season at the Bord Gais Energy Theatre this July.

Based on the Pulitzer prize-winning book by Frank McCourt Angela’s Ashes The Musical will play Bord Gais Energy Theatre from 18- 30 July 2017, and will also have dates at Limerick’s Lime Tree Theatre (6-15 July) and the Grand Opera House Belfast (1-5 August).

For the very first time, in a major musical adaptation, Frank McCourt’s memoir is brought to the stage in an emotional telling of a childhood in Limerick and beyond, featuring unforgettable songs and melodies, told with a rare lyricism and a warm inimitable sense of humour.

All aboard: Model January Winters posed for a snap on the deck | BRIAN MCEVOY

Angela’s Ashes The Musical has that rare gift of bringing an audience to tears one minute, laughing out loud the next – by turns, deeply moving and riotously funny, this new musical promises to be one of the major theatrical events in Ireland in 2017.

Guests on the night including sisters Aoibhin Garrihy and Ailbhe Garrihy, as well as model January Winters – who got a unique and engaging insight into what Irish audiences can expect from this incredible show.

For the first time there was a showcase of the music from the show with an exclusive performance of two original songs as the show sets sail for a smash hit summer season.

For more information, check out www.bordgaisenergytheatre.ie.

Girl’s day out: Triona McCarthy and Margaret McCarthy climbed aboard for the official launch | BRIAN MCEVOY 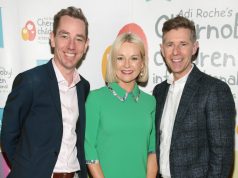