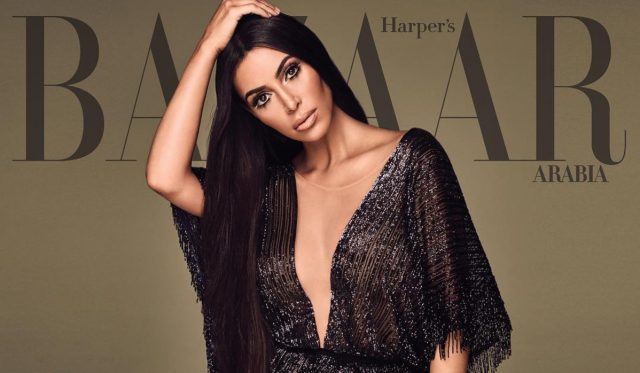 Kim Kardashian was transformed into her style idol Cher for the front cover of Harper’s Bazaar Arabia.

The Armenian beauty posed for the September 2017 issue of the magazine, and the cover was released just days after her controversial Interview photo shoot, in which she channeled another one of her style icons – the late first lady Jackie Kennedy Onassis.

Speaking about Cher’s style, Kim told Harper’s Bazaar Arabia, “She’s always had the sickest style, I’m obsessed with her. To think that she was wearing these sheer dresses in the ’70s and just what people must have thought back then.”

Like Cher, Kim refuses to apologise for being sexy, especially now that she’s a mother to two children – North, 4, and Saint, 1.

“At the end of the day I still have to be me,” she said. “If doing sexy shoots makes me feel confident, then I’m OK with it.”

“More power to the moms that look really good, work really hard, do what they can so that they still feel sexy, still feel good about themselves. I don’t think for a second that because you become a mom you can’t be sexy any more,” she said.

During the interview, Kim also spoke about being a ‘modern’ feminist.

“I said once before that I’m not really a feminist,” Kim tells Bazaar. “But I feel I do a lot more than people that claim that they’re feminist. To clarify what I said before: I feel in my soul I’m a feminist. I just don’t need labels to make me feel or know what I am inside.

“Modern feminists are all the girls around us today. Every time you look on social media and there’s someone standing up for themselves, to me that’s a modern feminist. There’s such an amazing group of girls that empower each other.”

The 36-year-old also spoke about the negativity that social media breeds in this day and age.

“I’m going to be so worried for the time my kids want to get on social media. It doesn’t seem like the safest place. I have a pretty thick skin. But I feel bad for anyone that gets hate on social media.

I love this shoot! I am so inspired by my style icon Armenian queen @cher pic.twitter.com/ErwxFlwiKp

“There’s so much cyber-bullying and negativity in comments to everyone. I think it’s so wrong. No matter what you do, you’re so judged and criticised on social media. I hope it changes. I hope people stop being so negative. We can only go further if everyone uplifts each other and supports one another,” she continued.

On the topic of politics, Kim said, “Sometimes I feel like I want to speak out more about political issues. You have to be really careful about what you say, because a lot of things can be taken in the wrong context and I always want to be respectful, I don’t want to hurt anyone’s feelings.”

However, Kim isn’t bothered by hurting US president Donald Trump’s feeling, as she said, “Anyone can run the US better. My daughter would be better.”

“We’ve worked so hard to get to where we were and to have so many things that we were so proud of in our country, to just literally revert backwards is the most frustrating thing.

“Every single day when you can’t really believe what’s going on, the next day it’s something else even more crazy and tragic. It’s really scary, the world that we’re living in now. And when you did feel safe at home, now with Trump in presidency you just don’t feel safe any more.”

When asked if she follows Donald on Twitter, she said, “I do not. I follow Obama though.”