The years of standing on a bikini on the top of Grafton Street during a Baltic cold day seemed to be over – but photocall modelling is making a comeback.

Just when we thought the days of models posing in ridiculous photo shoots to show off products (think the early days of Nadia Forde, Georgia Salpa and Hazel O’Sullivan) another model has joined the ranks – and it’s none other than Rob Kearney’s girlfriend.

While most would believe a ‘modelling career’ entails catwalks, editorial shoots and beauty campaigns – in Ireland nine times out of ten you will be asked to shoot a photocall (cue the Grafton Street bikini shots again).

Bikini babes: Georgia was the queen of photocalls | VIPIRELAND.COM

Photocall models have always been huge in Ireland | VIPIRELAND.COM

Back in the early noughties photocalls were the best paying jobs and made celebrities out of models like Georgia, Nadia, Hazel and most of the well-known faces on the scene today.

But isn’t the photocall a bit dated now?

New model Jess didn’t seem to think so as she struck several different poses this week – including holding up a giant €60M sign for the National Lottery, hanging out the window of a van and holding wads of fake cash in the back of said van with the doors wide open (as you do).

The blonde seems more than happy to be in the spotlight, despite her other half Rob being notoriously private and the couple only being pictured together three times to date.

Jess has already said she won’t be speaking about Rob to the press, although she posted photos with the rugby star on their Dubai getaway before Christmas.

So what can we expect from Ireland’s newest model in the coming months?

Will she be Ireland’s new ‘go to’ model to plug a brand or publicise an event?

Don’t get me wrong, photocalls pay the bills (and then some). A few of Ireland’s top models can take away about €500/€600 for a photo call shoot, while up and coming models can expect closer to €150/€200 for their time.

I once spent a freezing cold morning in Stephen’s Green with a well known Irish model, who was doing a photocall just a few days after Christmas.

I was absolutely freezing even though I was the one in a coat and jacket – she was in a teeny-tiny dress, and it started to snow, the photographers were delighted, she was not.

Shaking in her stilleto heels, right after the shoot she used a hand dryer in a near by hotel bathroom to heat herself up, as I stood there warm and cosy interviewing her.

This is the reality I’ve seen for photocall models. And sure that model in particular is still in the news these days, but is it worth it?

Some Irish models use photocalls as a side gig to their actual money makers.

A lot of models frequently appear on TV3’s Ireland AM and Xpose, and bagging a weekly gig there is the aim.

Former Miss Ireland Aoife Walsh is probably one of Ireland’s busiest models, shooting for TV3, walking in wedding fairs and fashion factories plus she often appears in photocalls, including some for the National Lottery.

But she also became the face of the Guinness Newbridge collection, which seriously secured your modelling career and proved she has what it takes to be one of Ireland’s leading models.

Then you have the likes of our top fashion models – Sarah Morrissey, Teo Sutra, Thalia Heffernan, Irma Mali to name a few.

They are no where near as known in the press but they are the ones taking to the catwalks and walking in invite only shows for the likes of Brown Thomas and Louise Kennedy.

When there’s a new season or fashion previews these women are in practically every single show…That sounds more like it.

Most of our high fashion models have also led campaigns and worked internationally. Sounds a lot better than a cold morning in Stephen’s Green forcing yourself to keep smiling to get the right shot for the brand and PR company.

Georgia Salpa was one of the first photocall models in Ireland, but in fairness she has always been a stunning lingerie model, which is what pushed her career forward, selling thousands of calendars and landing in Celebrity Big Brother.

But once photocall modelling became an actual thing, it quickly became the must-have career.

Let’s just think back to those extremely cringe photos of the Miss Bikini Ireland contestants.

After I wrote THIS piece their pictures landed in UK papers as well as on FOX News in the US, which led to more shoots for ‘Luas girl’ aka Ana Pavel.

With Ireland bouncing back from the recession quickly more and more brands are starting to pay for plot calls again.

So prepare yourself for more awkward poses, bizarre sets and more headlines like this one… 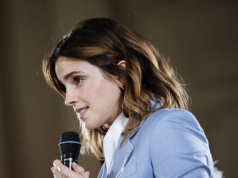 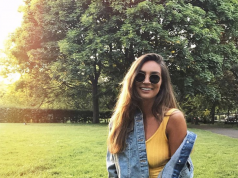