Coppers is an Irish institution and whether you admit it or not you really do love the place deep down (and end up there a lot).

Say what you will about the landmark Harcourt Street venue, it’s stood the test of time and remains Dublin’s most popular nightclub.

As Coppers celebrates their 20th birthday party this week, we’re giving you our top 5 reasons why they’re the best.

1. You’re guaranteed to get the shift

This happens in most nightclub, but it’s on a whole other level in Coppers.

If you find your luck running out when you’re on a night out, just head over to Harcourt Street and you’re sure to find someone who’ll give you the time of day.

We’re not sure why Coppers has this effect on people, but we’re glad it does.

2. The 90s tunes are always blaring

Sure, they play all the current hits like any other club but as the night goes on – you can be sure to hear some classics from your childhood.

3. You’ll always meet someone who swears they never go to Coppers

Since Coppers has become such an institution, some people think it’s ‘uncool’ or too ‘mainstream’ to go there.

If you find yourself flirting with a stranger on the dancefloor or talking to the lad who let you borrow their lighter in the smoking area, they’ll probably tell you they never go to Coppers.

4. You could see a few celebs in there

As the country’s most famous nightclub, it’s no surprise Copppers attracts some well known clientele.

Sports players are the most frequent attendees from the rich and famous crowd.

From Leinster players to GAA heroes, you’re bound to see someone you recognise from the pitch in there.

Above the famous Coppers dancefloor their exists a smaller, more elusive room known as Toppers.

The exclusive room has played host to the VIP Style Awards after party in the past (and again this year).

Get your hands on a cheeky wristband and you too could sneak into Toppers, good luck and God speed. 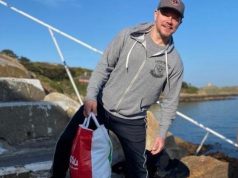