Hot off the tails of not one but TWO Twitter spats involving Taylor Swift, we’ve been looking back at the most salacious and outrageous online celeb battles to date.

Few things are more entertaining than when celebrities take to the fighting pits of Twitter.

Tensions escalated between the former One Direction band-mates after Zayn quit the group.

Louis made a dig at Zayn’s new producer Naughty Boy after he accused Louis of using too much autotune.

Then Zayn stepped in – telling Louis to get a life. Ouch.

The row between these pop queens started after Ciara went on the U.S. TV show Fashion Police and said Rihanna was chilly in person.

“I ran into her recently at a party,’ she said. “She wasn’t the nicest.”

Rihanna jumped to twitter to retaliate with some brutal burns.

This disjointed mess happened after Wiz made some indirect tweets about Kanye – and made the mistake of mentioning “kk” – which Kanye interpreted as being about his girl Kim Kardashian.

That set him off into a 26-tweet-long tirade, which he has mostly deleted, but some quick twitter users screenshot the highlights.

TMI! Amber Rose hit back at Kanye with the force of a hurricane. A hurricane of unnecessarily specific sexual details.

Her hashtags make it that much crazier. Moral of the story – don’t mess with Amber Rose on social media.

Twitter’s reaction to the Kanye storm was priceless. “Live look at Kanye’s publicist” a user tweeted:

This one’s a classic.

Who knew the chill teenager had such fire up her sleeve?

It’s never a good idea to test your wit against a best selling author. J.K. Rowling delivered this stunning smackdown after an internet troll shot off this middle school insult: “F*ck off you Labour C**T.

All you lefties are finished in this country, especially you JK bitchface.”

J.K., of course, destroyed him with style.

Wow…This burn is a real scorcher.

The Scottish comedian made this pointed jab at Chris Brown, referencing Chris’s past abuse of Rihanna.

Kim clapped back hard at Chloe, after the young actress criticized a nude selfie Kim posted on Twitter with this tweet:

@KimKardashian I truly hope you realize how important setting goals are for young women, teaching them we have so much more to offer than-

“-just our bodies” Chloe finished in her next tweet. Shots fired.

Calvin is referencing the reveal that Taylor contributed to his hit This is What You Came For.

He even brought up Tay’s beef with Katy Perry – and finished off with a passive aggressive “God bless.” 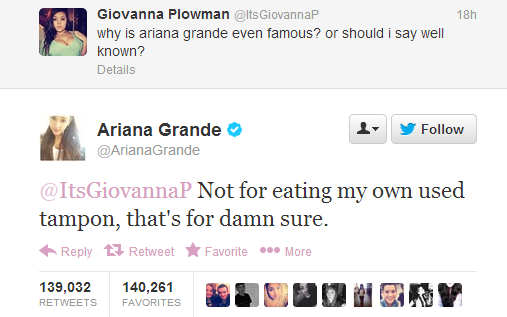 Giovanna took a swing at pop princess Ariana – apparently forgetting how she herself got famous. Oops.

In possibly the nicest twitter feud ever, Nicki made a comment about how thin women are glorified in the music industry.

Taylor thought the tweet was directed at her – but Nicki soon reminded Tay that they’re both on the same team.

Girl power for the win!

This one is short and sweet

We sense a pattern here…

Kanye West dove headfirst into a classic all caps Kanye rant. His target: Jimmy Kimmel, who spoofed the rapper on his show. Jimmy took it all in stride, while Kanye provided us with a hilariously out of control string of tweets.

.@ConanOBrien I’m considering going as hunky Conan O’Brien – but that might be too far fetched.

Zayn delivered this zinger during a bizarre twitter feud with the Scottish DJ that started with artist royalties and ended in personal attacks.

I guess Zayn thinks being 30-something is ancient.

A Complete List Of The BEST Black Friday Deals

ANOTHER star has left I’m A Celebrity: Get Me Out Of...