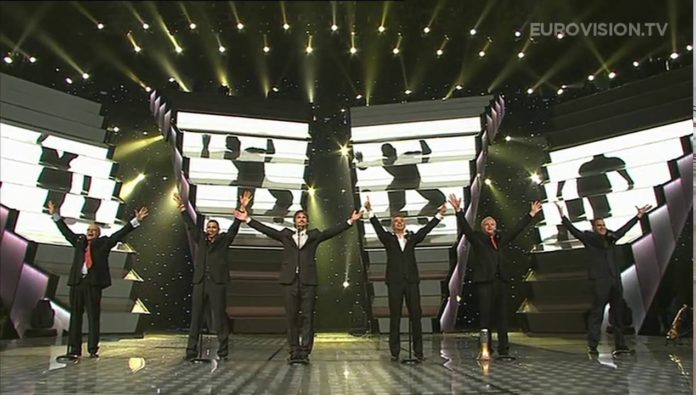 Ahead of the final, Betfair Casino carried out a survey in which fans voted for their least favourite performances from throughout the years.

Take a look at what fans voted for:

Scooch represented the UK in Eurovision in 2007, and their performance of ‘Flying The Flag’ has been voted the worst in the song contest’s history.

The song came in joint 22nd overall with a total of 19 points.

In spite of this, ‘Flying The Flag’ reached number 5 in the UK singles chart.

Dustin The Turkey represented Ireland in Eurovision 2008 with the song ‘Irlande Douze Pointe’.

Despite being one of the most memorable performances in the song contest’s history, fans voted for it as their second least favourite performance.

We sadly didn’t make it into the final of Eurovision that year, coming in 15th place out of 19 countries in the semi-final.

The duo Jemini, who represented the UK in 2003, have been voted as the third worst act to have entered Eurovison with their song ‘Cry Baby’.

Cry Baby was the first ever song in the English language to receive no points.

Kreisiraadio represented Estonia in the 2008 Eurovision with the song ‘Leto Svet’.

They placed 18th out of 19 countries in their semi-final, after only scoring a total of 8 points.

Lithuanian group LT United performed ‘We Are The Winners’ at the 2006 Eurovision.

The song was reminiscent of Queens ‘We Are The Champions’, but overall it was far too cheesy and wound up on the this list of worst ever Eurovision performances.

Krassimir Aramov performed in the Eurovision for Bulgaria in 2009 with his song ‘Illusion’.

The song wasn’t to everyone’s taste, and Krassimir didn’t make it through to the final.

The Icelandic entry Silvia Night performed ‘Congratulations’ at the 2006 Eurovision.

Silvia caused controversy with her lyrics “the vote is in, I’ll f**king win” – which is in violation of the rules of the contest.

When asked at a press conference if she was going to change her lyrics, Silvia said she would “f**king say what I f**king want”.

‘Mil etter mil’ by Jahn Teigen has a record in the Eurovision, but it’s not a good one.

The song, which was Norway’s entry in the 1978 contest, was the first ever song to score 0 points in the competition.

Jahn Teigen was also known for his bizzare stage performance.

Eurovision Song Contest: Who are the ‘Big 5’ and why do they automatically qualify each year?