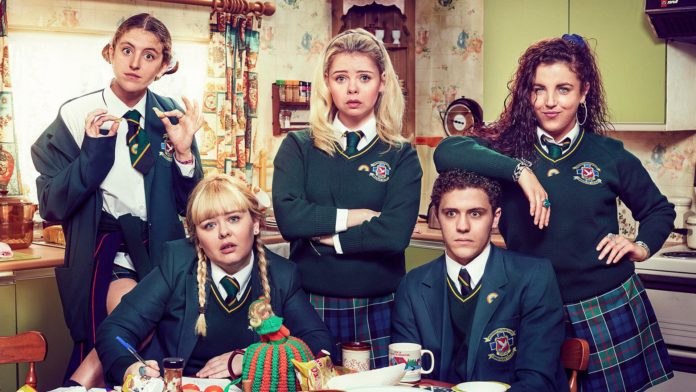 Derry Girls is sadly coming to an end, with the third and final season airing every Tuesday evening on Channel 4.

The hit sitcom follows the lives of a group of friends who attend an all-girls school in Derry during the Troubles in the 1990s.

Ahead of the season finale, we have rounded up some of the show’s most memorable moments to date. Take a look:

In the season one finale, Orla (Louisa Harland) becomes the target of jeering and snickering as she performs her step aerobics routine at the school talent show.

Her cousin Erin (Saoirse-Monica Jackson) and the rest of her friends stand up for her and join her onstage in a sweet moment. As they dance together, the girls are blissfully unaware of what is going on in the world outside their school.

Their families are at home watching the news about a bombing that left 12 people dead. Grandad Joe (Ian McElhinney) comforts Gerry (Tommy Tiernan) by placing his hand on his shoulder, as ‘Dreams’ by The Cranberries plays in the background.

This poignant moment hit us right in the feels.

One of the most iconic moments from Derry Girls is the scene in which the girls and James stay up all night to study for their history exam.

In the scene, Clare (played by Nicola Coughlan) started freaking out because she hadn’t revised the Irish famine despite being up all night.

Michelle (played by Jamie–Lee O’Donnell) explained to Clare: “We’ve got the gist, they ran out of spuds, everyone was raging.”

James (Dylan Llewellyn) then piped in, saying: “Well I can’t tell my rebellions from my risings,” to which Michelle replied: “And who’s fault is that? If your lot had stopped invading us for five minutes there would be a lot less to wade through.”

This scene is one of the most beautiful and touching scenes in Derry Girls, as it’s very rare for Michelle to be sentimental.

In the final episode of season 2, James reveals he wants to return to London because he feels he doesn’t belong in Derry.

An emotional Michelle didn’t want her cousin to leave, and said: “You’re a Derry Girl now James… I’m serious, it doesn’t matter that you’ve got that stupid accent, or that your bits are different to my bits, because being a Derry Girl is a state of mind.”

Later on in the episode James changed his mind and shouts down at Guildhall Square from the historic Derry Walls: “I’m a Derry Girl.”

However in typical Derry fashion, the emotional moment doesn’t last long as a passer-by can be heard remarking: “A prick is what you are.”

Another emotional scene in Derry Girls is the scene in which Orla (Louisa Harland) asks Grandad Joe (Ian McElhinney) to the Prom.

When Aunt Sarah (Kathy Kiera Clarke) asks Orla what time her date is arriving, the camera turns to Grandad Joe who chimes in: “He’s already here.”

Erin (Saoirse-Monica Jackson) looks shocked, and says: “You asked Grandad to the Prom?”

Orla then replies in a heartwarming moment: “Well everyone kept saying you have to ask a fella you really like and he’s the fella I like the most.”

In this brilliant scene, the girls take off after a dog which they believe to be Erin’s dead dog Toto.

The gang end up in a church where they believe they saw a statue of Our Lady cry real tears.

However, it turns out Toto has actually peed on the statue, but Erin goes along with the ‘tears’ theory to try and get out of an exam.

In this memorable Derry Girls scene, the show takes a quick turn from a wedding to a wake after Aunt Bridie dies.

While standing around Aunt Bridie in her coffin, Michelle presents the girls with some scones she’s made. But they aren’t any old scones, they are “funny” scones.

A few seconds later, a woman takes the scones downstairs with the rest of the catering, and the girls now have a mission to retrieve them and make sure nobody eats one.

Not only is the whole concept of this episode brilliant, the pronunciation of scones is enough to have you laughing.

Uncle Colm, played by Kevin McAleer, is definitely one of the funniest characters in Derry Girls.

In the season three premiere, he comes to the girls rescue when they are arrested for breaking into their school.

When an RUC inspector (played by Liam Neeson) asks the girls to call a parent or a guardian to come to the station, they know just who to call.

Uncle Colm eventually wears the police down by boring them with one of his lengthy stories, and the scene is absolutely hilarious.