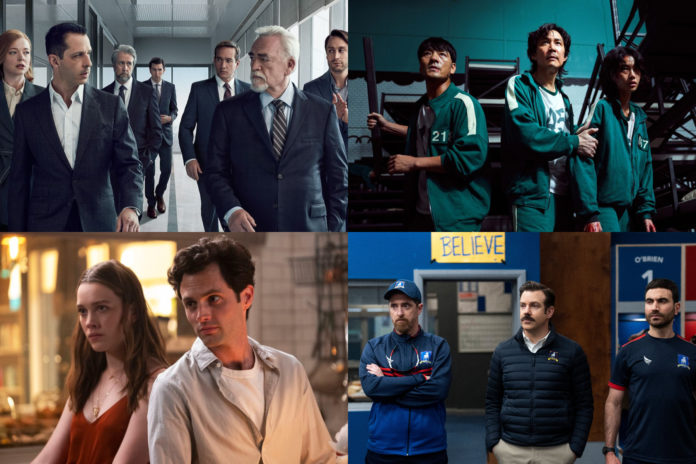 There’s only a couple of days left in 2021, so we’re taking a look back at some of the biggest TV shows of the year.

From reboots of popular shows, to new seasons of hit series’, take a look at some of the most talked-about shows from the past twelve months:

Succession follows the dysfunctional Roy family, owners of media conglomerate Waystar RoyCo, who are fighting for control of the company amid uncertainty about the health of the family’s patriarch, Logan Roy.

The dramatic season three finale premiered earlier this month, and the award-winning series has officially been renewed for a fourth season.

You can watch the show on NOW TV.

According to Disney+, the series is “a blend of classic television and the Marvel Cinematic Universe in which Wanda Maximoff and Vision—two super-powered beings living idealized suburban lives—begin to suspect that everything is not as it seems.”

WandaVision is available to watch on Disney+ now.

Squid Game follows a group of 456 broke people recruited to compete in a series of children’s game to win a $40 million cash prize.

In it’s first 28 days on Netflix, the show’s first season was watched by a whopping 111 million users, making it the streaming giant’s biggest ever series launch.

While we eagerly await a second season of the show, you can watch season one on Netflix now.

Kate Winslet stars as Mare Sheehan, a police detective in a small Pennsylvania town investigating a brutal murder as she tries to keep her life from falling apart.

You can watch the limited series on NOW TV.

Season two of Ted Lasso debuted over the summer – and it was a huge hit with viewers.

The comedy-drama series follows a small-time American football coach named Ted Lasso (played by Jason Sudeikis), who is hired to coach a professional football club in England, despite having no experience coaching football.

Additionally, Jason won the Golden Globe Award for Best Actor – Television Series Musical or Comedy and the Screen Actors Guild Award for Outstanding Performance by a Male Actor in a Comedy Series.

You can watch season one and two on Apple TV now.

The highly anticipated third season of You joined Netflix in October.

Settling in the Northern California enclave of Madre Linda, Joe continues to repeat the cycle of obsession with a burgeoning interest in Natalie, their next door neighbour.

But this time, Love will flip the script to ensure that her dream of having the perfect family will not be torn away so easily by Joe’s compulsive actions.

The new season was a huge hit with fans, and it is available to watch on Netflix now.

Irish drama Smother premiered on RTÉ One this year, and it was a huge hit with viewers.

The six-part series centered around the mysterious death of Denis Ahern at his wife Val’s 50th birthday party.

All those in attendance at the party became prime suspects, including members of Val and Denis’ blended family, and the killer was finally revealed in the season finale.

Season two of the popular show is starting on RTÉ One on January 9, and the first season is available to watch on RTÉ Player now.

Line Of Duty was the show everyone was talking about this year, after the criminally addictive series returned for a sixth season.

Starring Adrian Dunbar, Vicky McClure and Martin Compston, the BBC series follows the trials and tribulations of anti-corruption unit ‘AC-12’ on their quest to rid the police of bent coppers, but how far will they go to uncover the truth?

The sixth season saw the team embark on their final mission to find out who the fourth and final ‘H’ was, and the season finale caused quite the reaction on Twitter…

You can watch Line Of Duty on BBC iPlayer.

The popular series follows the teenagers of Moordale secondary school as they try to navigate their sexualities and everyday teenage life.

The third season picked up from the shocking season two finale where Otis confessed his love to Maeve, only to have the voicemail deleted by another man fighting for her affection.

The new season was a huge hit with viewers, who branded season three the best season yet.

All three seasons are on Netflix.

The highly anticipated Sex and the City revival series premiered earlier this month.

‘And Just Like That…’ follows Carrie Bradshaw (Sarah Jessica Parker), Charlotte York (Kristin Davis) and Miranda Hobbes (Cynthia Nixon) as they navigate love and friendship in their 50s.

The first episode of the show left SATC fans shocked, as one of the show’s original characters tragically died.

You can watch the first few episodes of the 10-part series on NOW TV and Sky Comedy.

The Gossip Girl reboot premiered in the US in July, and was available to watch in Ireland from August.

You can watch the teen drama, as well as the original series, on RTÉ Player.