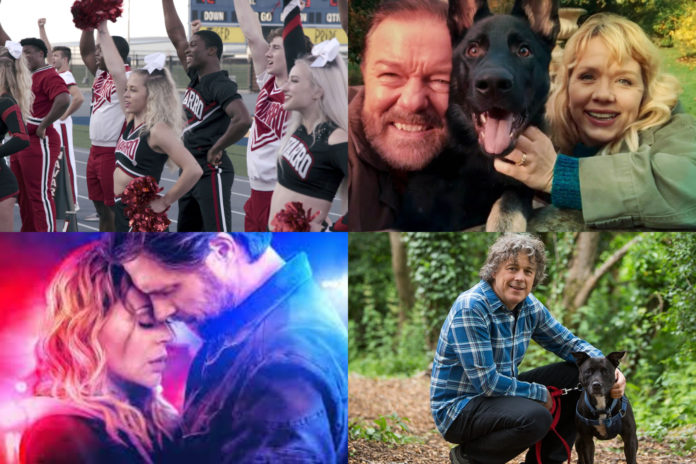 Need something new to watch on Netflix?

There are plenty of TV shows and movies joining the streaming giant in the coming days to keep you entertained.

Check out our top picks below:

The Emmy-winning breakout sensation Cheer is back and the stakes have never been higher.

As Season 2 opens and the buzz around their newfound stardom threatens to alter the dynamic of Navarro Cheer, the team finds no amount of press frenzy could compare to the challenges they must face when COVID-19 upends the 2020 cheer season and a serious criminal accusation is levied at one of their teammates.

As with the Navarro team, TVCC has a charismatic coach and breakout stars whose struggles, triumphs and stories extend far beyond the mat.

As both teams push for the 2021 championship in Daytona, familiar faces take compelling detours and new contenders make a name for themselves.

Prominent mystery writer and crime expert, Grace (played byAlyssa Milano), hurries back to her family home in Washington, D.C. because her estranged sister summons her.

When her sister is killed and her double life as a webcam performer is revealed, Grace ignores the warnings of cool-headed detective Ed and gets involved in the case.

Get your tissues at the ready, because the third and final season of After Life is coming to Netflix this week.

Ricky Gervais stars as a local journalist named Tony in the hit series, who is struggling to cope with the death of his wife Lisa.

Catch the brand new episodes on the streaming giant this Friday, January 14.

Ben Fogle and Kate Humble present this BBC series based at Longleat Estate and Safari Park in Wiltshire.

Attracting many visitors every year, the park is home to a wide variety of animals, from giraffes, to lions, cheetahs and flamingos.

The presenters follow the behind-the-scenes drama at the animal enclosures, and explore the challengers faced by the keepers. Ben and Kate join the keepers as they monitor the health of the animals, welcome new arrivals, and make improvements to the enclosures.

With more than one million reports of animal cruelty and mistreatment every year, the RSPCA is under increased pressure to keep Britain’s pets safe from abusive owners and unscrupulous breeders.

The Dog Rescuers follows the organisation’s inspectors as they track down some of the UK’s abused and mistreated animals in an attempt to rescue them.

Among the crimes against dogs that they investigate are poor living conditions, illegal mass breeding, malnutrition and organised fights. When successful in rescuing the dogs, the animals are rehabilitated and eventually given new homes.

A physician, who can speak with animals, is summoned by the queen to find a cure for her life-threatening disease. Soon, he embarks on a journey with his furry friends in search of a healing tree.