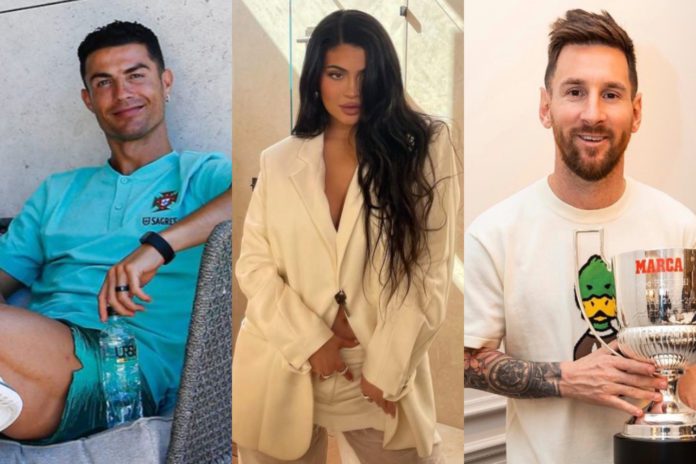 According to Hopper, Cristiano Ronaldo has topped the official list for the second year in a row.

The Manchester United footballer, who has 457 million Instagram followers, earns a cool $2.39 million per post, which is a 49% increase on last year.

Mike Bandar, co-founder of Hopper said: “With Ronaldo’s return to Manchester United and the release of his wife’s Netflix show, it’s no wonder that the football icon has held his number one spot.”

The official list showed that Kylie Jenner has jumped to second place, from fourth place in 2021.

Taking the third spot is Lionel Messi, with an estimated $1.77 million per post, followed by Selena Gomez ($1.73 million), and Dwayne Johnson ($1.71 million).

Narrowly missing out to Kim was Ariana Grande, with an average of $1.687 million per post.

The official 2022 list marks the first time Khloe has appeared in the top 10 of the highest-earning Instagram accounts.

The only Kardashian sister not to appear in the top 10 was Kourtney, who made the list at number 17 with approximately $964,000 per post.

Hopper also created an official TikTok rich-list for 2022 for the first time in its six-year history.

Mike Bandar explained: “With TikTok’s rising popularity, [Hopper] were intrigued to find out what TikTok stars earn through the platform and how that influences their earnings on Instagram.”

“Although TikTok earnings are less, this may be due to the platform’s relative infancy. Yet the fact that platforms like Instagram are adapting to compete with the video app is an indicator of TikTok’s power and potential growth, so perhaps we might see stars earn more on TikTok and less on Instagram next year.”