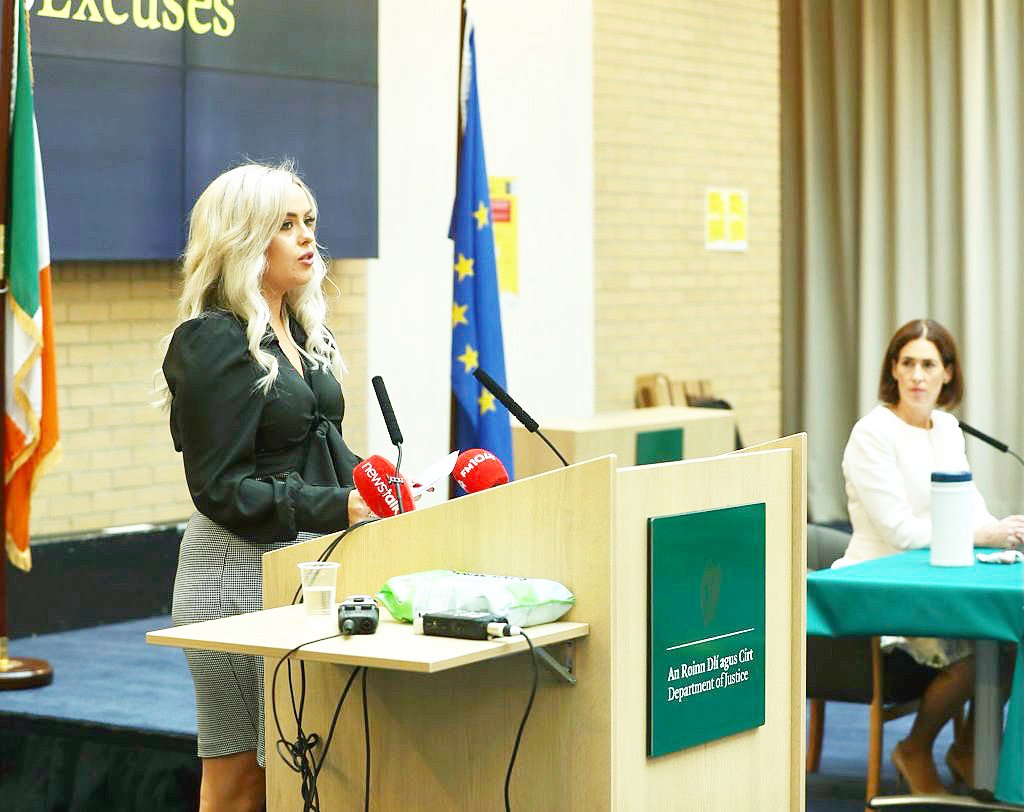 After bravely sharing her own story on this platform, Goss.ie Founder Alexandra Ryan has today launched a new campaign to combat the sharing of intimate images without consent.

Alongside the Minister of State for Civil and Criminal Law, Hildegarde Naughton TD, Alexandra unveiled a new social media campaign aimed at raising awareness around The Harassment, Harmful Communications and Related Offences Act (aka Coco’s Law).

Coco’s Law, which was enacted on 10 February 2021, created new offences which criminalise the non-consensual distribution of intimate images.

As part of the government’s plan to tackle the sharing of intimate images without consent, victims can now report the sharing of illegal content online to Hotline.ie/report.

Hotline will help to get the images removed from the internet and social media platforms.

Independent research commissioned by the Department of Justice found that one adult in 20 claims to have had an intimate image of themselves shared to an online or social media site without consent. This rises to one in 10 among 18-24 and 25-37 year olds.

Someone who has suffered the devastating impact of intimate content being shared without consent is Alexandra Ryan, Founder and CEO of Goss Media.

Five years ago, a man Alexandra was in an intimate relationship with secretly recorded a video of them together. The video was later shared by someone else without her consent.

Alexandra is now telling her story as part of the awareness campaign to help encourage other victims to report this crime.

Speaking ahead of the launch, she said: “When I found out that someone I trusted had taken an intimate video of me without my knowledge or consent, I felt utterly helpless and alone.”

“The footage was then taken by another woman and shared, again without my consent. At that time, there was no law against filming or sharing intimate footage without consent. I felt broken, judged and ashamed.”

“It took me five years to tell my story and I can honestly say that this horrific exploitation has caused endless emotional pain and suffering that I still battle to this very day.”

“I think it’s important now more than ever to give a voice to victims who have been through something similar, or in some cases, a lot worse.”

“I think this new legislation will be a lifeline for victims of this crime. I have been following the creation of this legislation for such a long time and I think it’s so important that people – victims and abusers – now understand that sending or sharing an intimate image of someone without their consent has serious consequences,” she continued.

“I commend Hildegarde Naughton and the Department of Justice for their efforts in bringing this legislation forward and I thank them for their work in helping victims across Ireland report this crime by being able to contact hotline.ie and the Gardaí.”

Anyone who has concerns about an intimate image which they believe is being shared without the consent of the person featured is now being asked to contact hotline.ie/report.

Hotline.ie is a web-reporting service which facilitates the removal of child sexual abuse images and videos from various platforms, and is broadening its scope to allow for the reporting of intimate images shared without consent.

Minister Naughton added: “Sharing an intimate image of someone without their consent is abhorrent, and can have long-lasting and harmful emotional and mental health effects.”

“Sharing or threatening to share intimate images is a form of abuse, and there are no excuses for it. Motivations don’t matter.”

“If you share an intimate image without consent, you share in the abuse and there is legislation in place with appropriate punitive measures that will challenge the actions of these abusers.”