Celebrities Who Got Married This Year 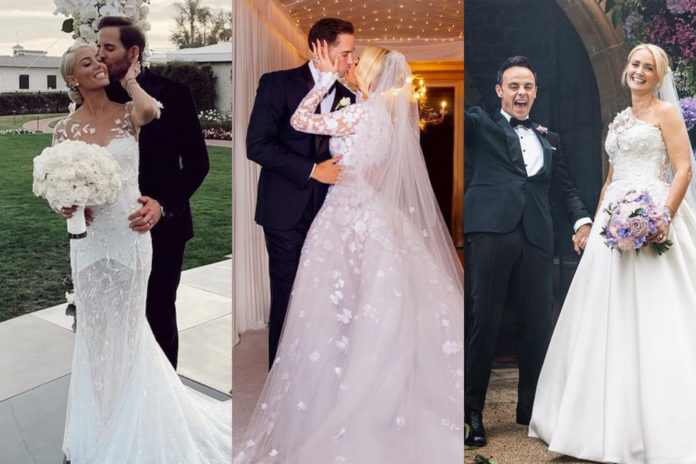 2021 was a special year for many of our favourite celebrities.

Some well-known reality stars, movie stars, singers, and presenters said ‘I do’ this year in stunning ceremonies.

The actor, 57, tied the knot for the fifth time in a “very small and intimate wedding” at the Wynn Hotel.

The bride wore a handmade Japanese Bridal Kimono, and walked down the aisle to ‘Winter Song’ by Kiroro.

Ariana Grande married Dalton Gomez in an intimate ceremony at their home in May, with close family and friends in attendance.

The couple started dating in early 2020, and spent a lot of time together as they isolated together in LA during the coronavirus pandemic.

Dalton proposed to Ariana in December last year and the couple tied the knot in secret just five months later.

Sharing the exciting news to Instagram at the time, Ariana wrote alongside wedding photos: “5.15.21 🤍.”

The actors sparked marriage rumours in May after they made their red carpet debut as a couple at the MTV Movie & TV Awards, where they were spotting wearing matching rings on their wedding fingers.

A source then confirmed to PEOPLE magazine that the couple had secretly tied the knot.

Gwen Stefani and Blake Shelton tied the knot in an intimate wedding on Blake’s Oklahoma ranch in July, with close friends and family in attendance.

The singer stunned in a Vera Wang wedding gown for the occasion, completing the look with a veil and a bold red lip.

Gwen and Blake met on The Voice US, and started dating in November 2015.

Anna Faris shocked fans in July when she announced she had secretly married Michael Barrett in a local courthouse.

The actress began dating the cinematographer in 2017, after they met on the set of her film Overboard.

During an episode of the Anna Faris is Unqualified podcast, the 44-year-old revealed she and Michael eloped.

During a conversation with a caller, Anna said: “My fiancé’s right – he’s now my husband.”

After letting the news slip, the Scary Movie star said: “Yes, we eloped… I’m sorry, honey. I just blurted that out, but it just feels [like] I can’t say fiancé anymore. It was awesome. It feels great. It was at a local courthouse up in Washington state. It was great.”

Gaz Beadle and Emma McVey exchanged vows in front of 90 guests at Merrydale Manor in July this year.

The couple met in early 2016, and confirmed their romance that August.

The former Geordie Shore star proposed to Emma in 2019, before the birth of their daughter Primrose.

Gaz and Emma are also parents to a 3-year-old son named Cheshire. 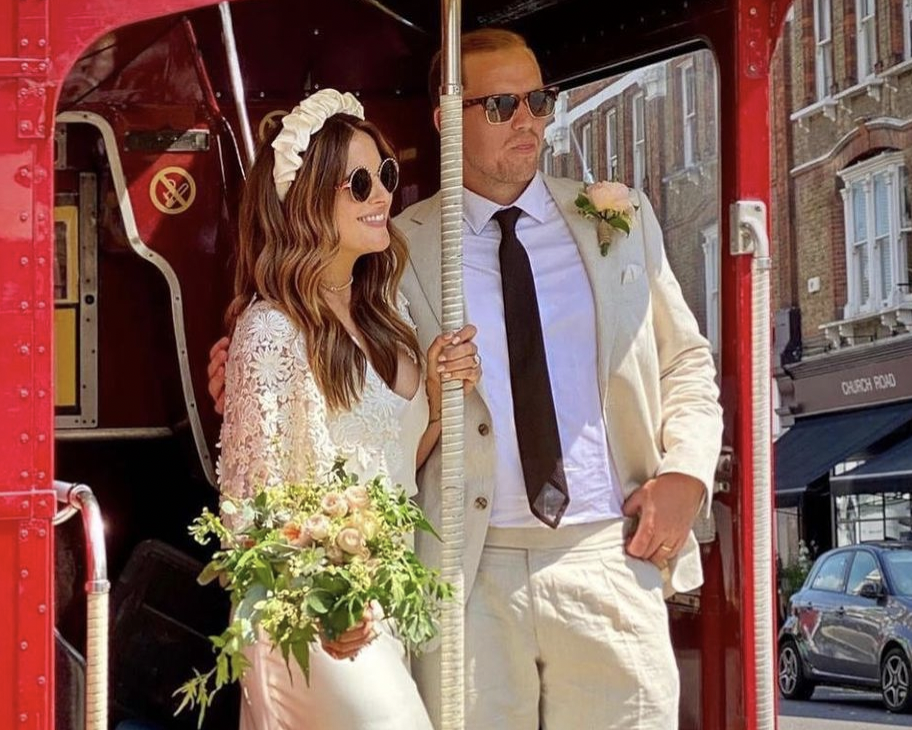 The couple tied the knot in front of a small group of family and friends at Chelsea Old Town Hall.

The news came just seven weeks after the couple welcomed their first child together, a son named Wolfie.

Binky is also mum to four-year-old India, who she shares with her ex Josh Patterson.

The Spice Girls star shared the exciting news via Instagram by posting a photo of the couple on their big day.

Emma and Jade have been together since 1998, and they got engaged in 2006. The couple share two sons together, Beau and Tate.

Ant McPartlin, one half of Ant and Dec, tied the knot this year.

The presenter married Anne-Marie Corbett in a star-studded ceremony in August, with Dec serving as his Best Man on the big day.

The couple have been together since 2018, and Ant proposed to his former personal assistant on Christmas Eve last year.

Lucy Watson and James Dunmore were one of the many celeb couples to tie the knot this year.

The pair had an extravagant wedding ceremony on the Greek island Kefalonia in September, one year after they announced their engagement.

Unfortunately, there was a huge thunderstorm on the day which literally put a dampener on their plans.

Lucy told her Instagram followers: “We basically got married in the rain and all the plans we’d made went out the window and we just had to work with what we had.”

The Made In Chelsea star had a second ceremony in the UK last month – a civil service to legalise their marriage on UK soil. The 30-year-old stunned in a white silk suit, while her husband looked smart in his grey suit.

The entrepreneur wed Alizée Thevenet in the French Village of Bormes-les-Mimosas in September, with his older sister and her husband Prince William in attendance.

James and Alizee met at the South Kensington Club back in 2018, after the French beauty stopped to say hello to his beloved pooch Ella.

Their romance became public knowledge when they were papped kissing while on holiday in St Barts in January 2019. They were on vacation with Irish TV presenter Vogue Williams and her husband Spencer Matthews – who’s brother is married to Pippa Middleton.

The couple got engaged in October 2019, and were originally scheduled to get married last summer – but were forced to cancel their plans due to the coronavirus pandemic.

The couple tied the knot in Basilica de Sant Francesc in Mallorca, and The Only Way Is Essex star had twelve bridesmaids for the ceremony.

Among the bridesmaids were Jess’ sister Natalya and sister-in-law Michelle Keegan.

William proposed to Jess during a romantic trip to the French Alps last March, just over a year after the couple started dating.

The couple were originally set to wed in June, but they pushed their special day back due to coronavirus restrictions.

The Emily In Paris star stunned in a white lace gown and cape, designed by Ralph Lauren.

The couple announced their engagement last September, after one year of dating.

The pair met on the set of Gilded Rage in 2019, which Charlie directed.

Camilla Thurlow and Jamie Jewitt said their “I do’s” in front of a host of celebrity friends in Gosfield Hall in September.

The couple met on Love Island back in 2017, and came in second place on the hit dating show.

They announced their pregnancy last year, and welcomed their daughter Nell in October 2020.

Jamie proposed to Camilla in February this year by dressing their baby daughter Nell in a personalised baby grow which read: “Mummy, will you marry my Daddy?”

The Selling Sunset star met her now-husband in July 2019, and the couple got engaged a year later.

The couple tied the knot near Santa Barbara surrounded by family and friends, including most of Heather’s Selling Sunset co-stars.

Tarek’s two children, who he shares with his first wife Christina Haack, were also present on the special day.

Heather wore a fitted corset dress with French lace, long sleeves, and a keyhole back custom-made by Israeli designer Galia Lahav for her wedding day, while Tarek donned a black velvet tux with a skull-and-crossbone-print lining.

The former footballer was first linked to Frida in August last year, following his split from Louise Redknapp in 2017 after 19 years of marriage.

Kym Marsh married Scott Ratcliffe in a romantic ceremony in front of their friends and family in October.

The former Coronation Street star got engaged to Scott on her 44th birthday back in June, after three years of dating.

The actress shares two children with her ex-husband Jamie, named Archie and Polly, and also has a son and a daughter from her relationship with Dave Cunliffe – David and Emily. 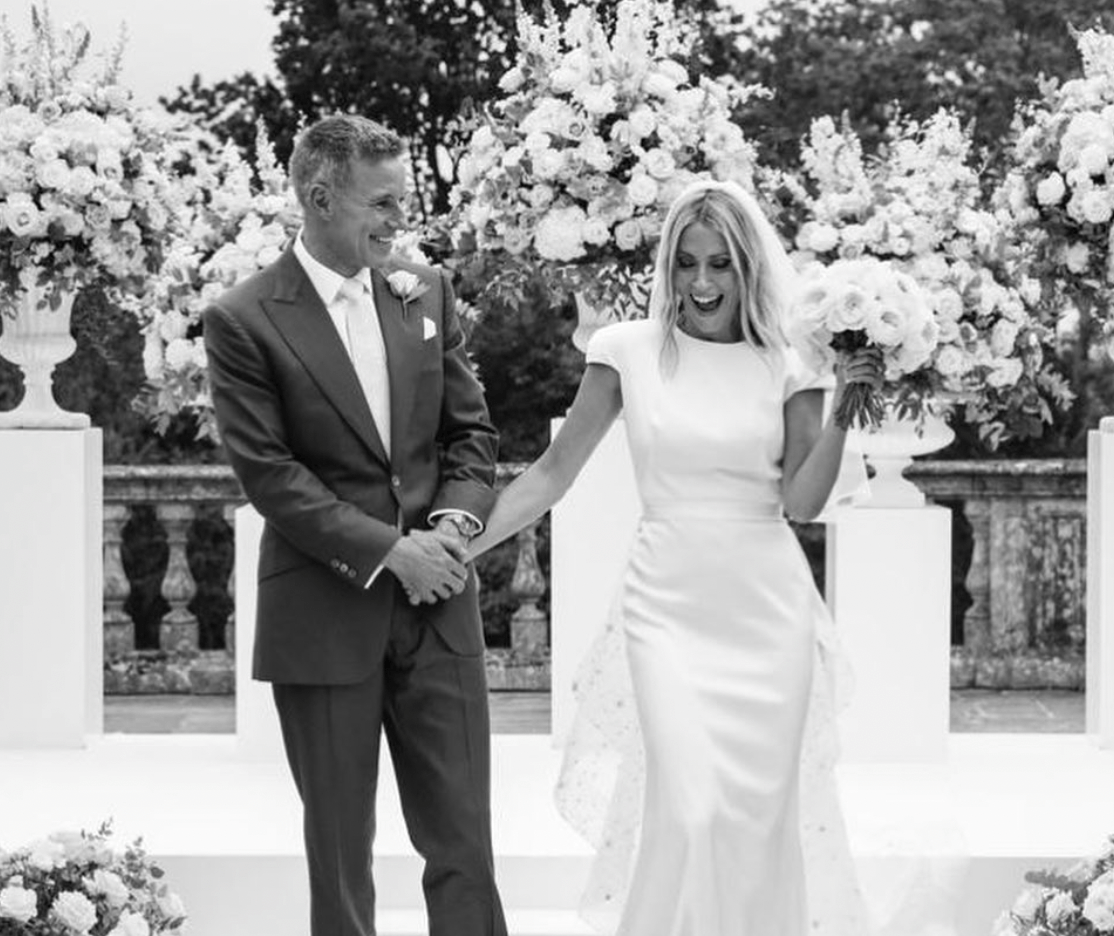 The couple tied the knot in a lavish ceremony at Cliveden House in Berkshire.

The news came after Nicole and Stephen welcomed a baby girl last year, after keeping her pregnancy secret for nine months.

Paris Hilton and Carter Reum exchanged vows at a church in Beverly Hills earlier this month, before they hosted a lavish reception at Paris’ late grandfather Barron Hilton’s Bel-Air estate in California.

Carter popped the question to Paris with a $1million engagement ring back in February, after over a year of dating.

The Chicago native is a longtime friend of the Hilton family, and is the founder of venture capital firm M13.