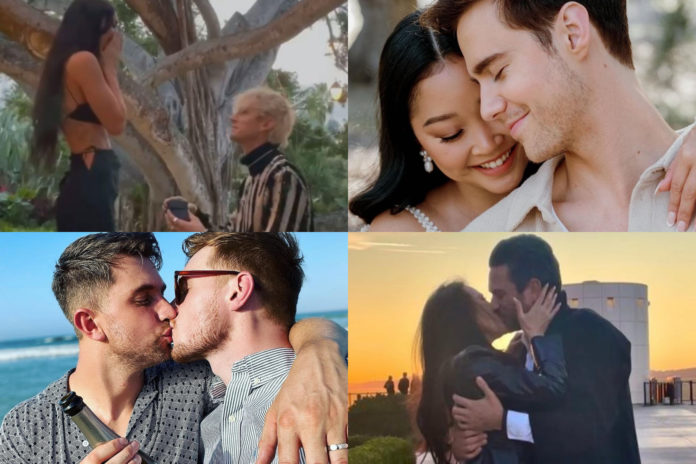 We may only be one month into 2022, but there has already been quite a few celebrity proposals this year.

We’ve listed the stars who have got engaged over the past few weeks.

The Disney Channel actress and the Home Alone star, who met while filming the movie Changeland, first sparked romance rumours in 2017.

Less than a year after they welcomed their first child together, the notoriously private couple are now ready to tie the knot.

A source confirmed the couple’s engagement news to E!, after Brenda was spotted wearing a huge diamond ring.

The To All The Boys I’ve Loved Before star shared the exciting news on Instagram, by posting sweet snaps of the happy couple.

The 24-year-old captioned the post: “Saying YES was the easiest decision I’ve ever made. I consider myself the absolute luckiest woman alive to live in your sphere.”

“Aside from my father, without a doubt, you are the greatest man in the world. Emmy & Timmy said it’s about time mommy & daddy got engaged!!!,” she wrote, referring to their two dogs. 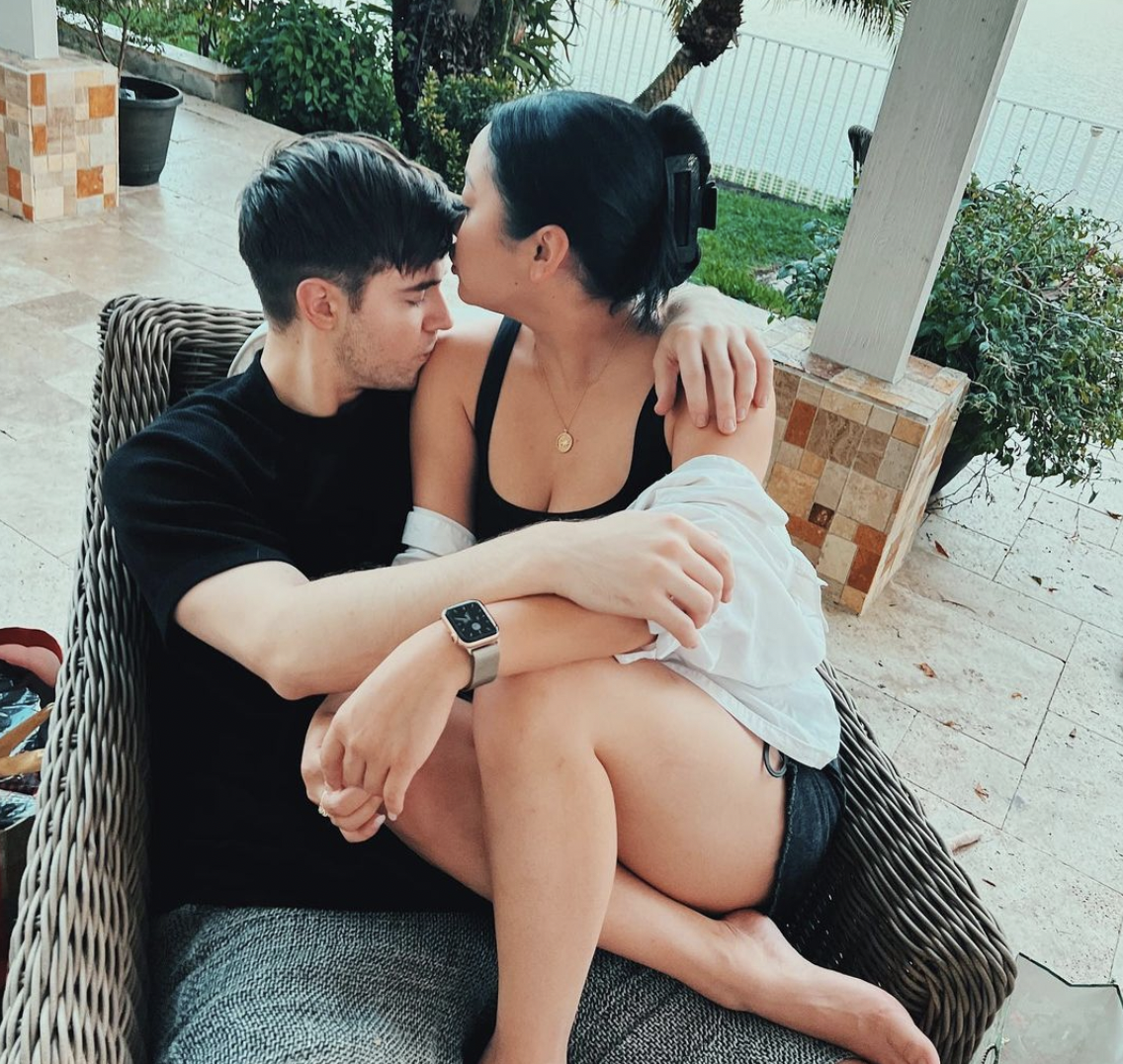 The actress also shared details about her engagement ring, writing, “Anthony worked with the INCREDIBLE Vietnamese female owned @parisjewellerscanada to design the most stunning piece I’ve ever seen!”

“The fact he knew how important it was to me that he’d collaborate w/ a Vietnamese company to help design my ring is a testament to just how truly thoughtful he always is.”

“I cannot wait to be your wife, baby. I love you a million times over,” she added.

Lana, who is best known for playing Lara Jean in Netflix’s To All The Boys I’ve Loved Before films, has been dating Anthony since 2015. 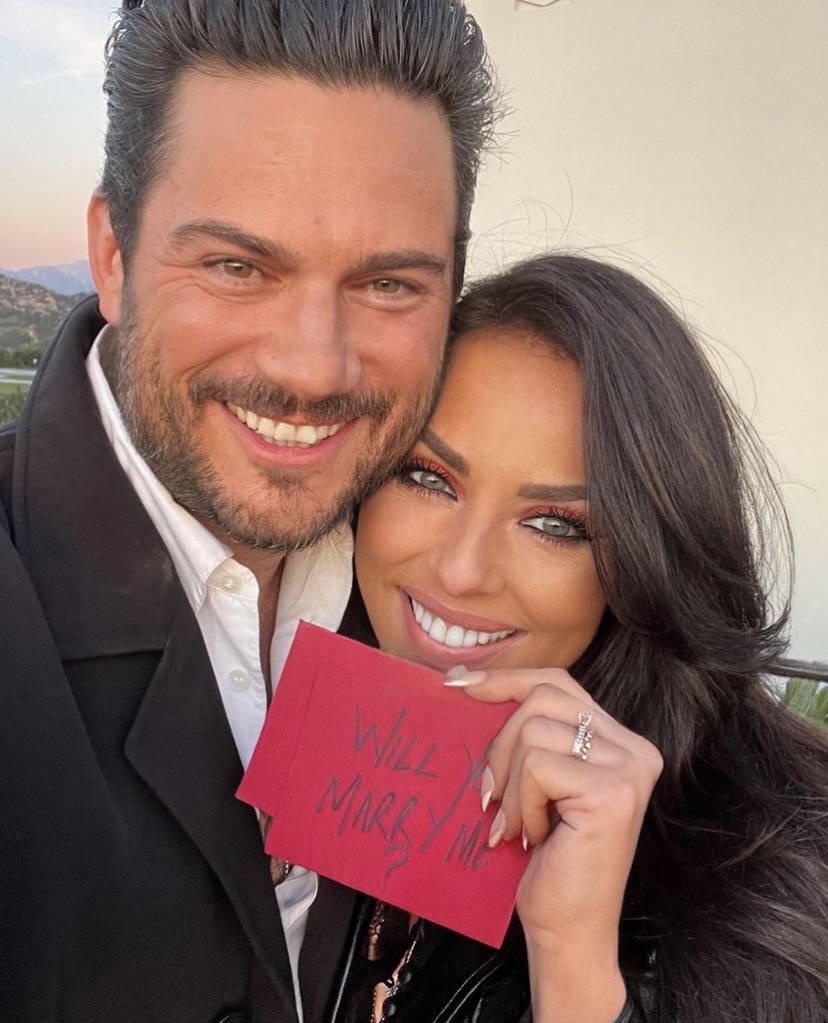 The actress’ photographer beau popped the question at the Griffith Observatory in Los Angeles on the couple’s one year anniversary. 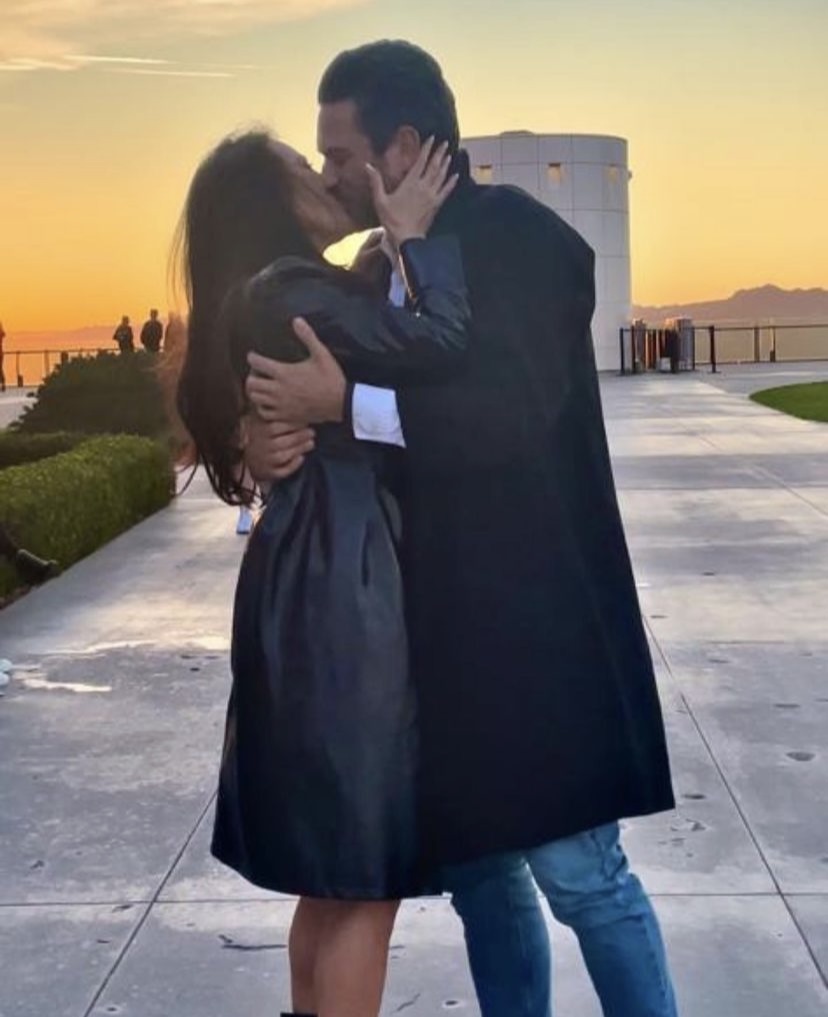 “One year ago I met the man of my dreams the one makes my heart skip every time, the man that makes me better in every single way, the man that I respect, adore, admire, and love with all my heart.”

“You came into my life when I least expected it and you came to make my dreams come true. Our love story is like a movie and you are my prince!! I always dreamed that I will find someone that will love the way I do and I could give my heart fully, thank youuu for coming into my life mi amore!”

“I can’t believe I manifested you, the man that is what I always dreamt and more, I can’t believe that I am living this life, sometimes I feel like I’m dreaming and I have to pinch myself to know that is a dream but in real life.”

The 44-year-old continued: “You paint the stars in my heart and even when I think it can’t be possible to be better there you go painting more stars in it. ✨🌟✨🌟✨🌟✨🌟”

“You are my best friend, my man, my pajaro, my hero, my everything. TE AMO @tomfraud Thank you for making me the happiest girl in the galaxy 💫 My future husband to be🥰❤️❤️❤️” 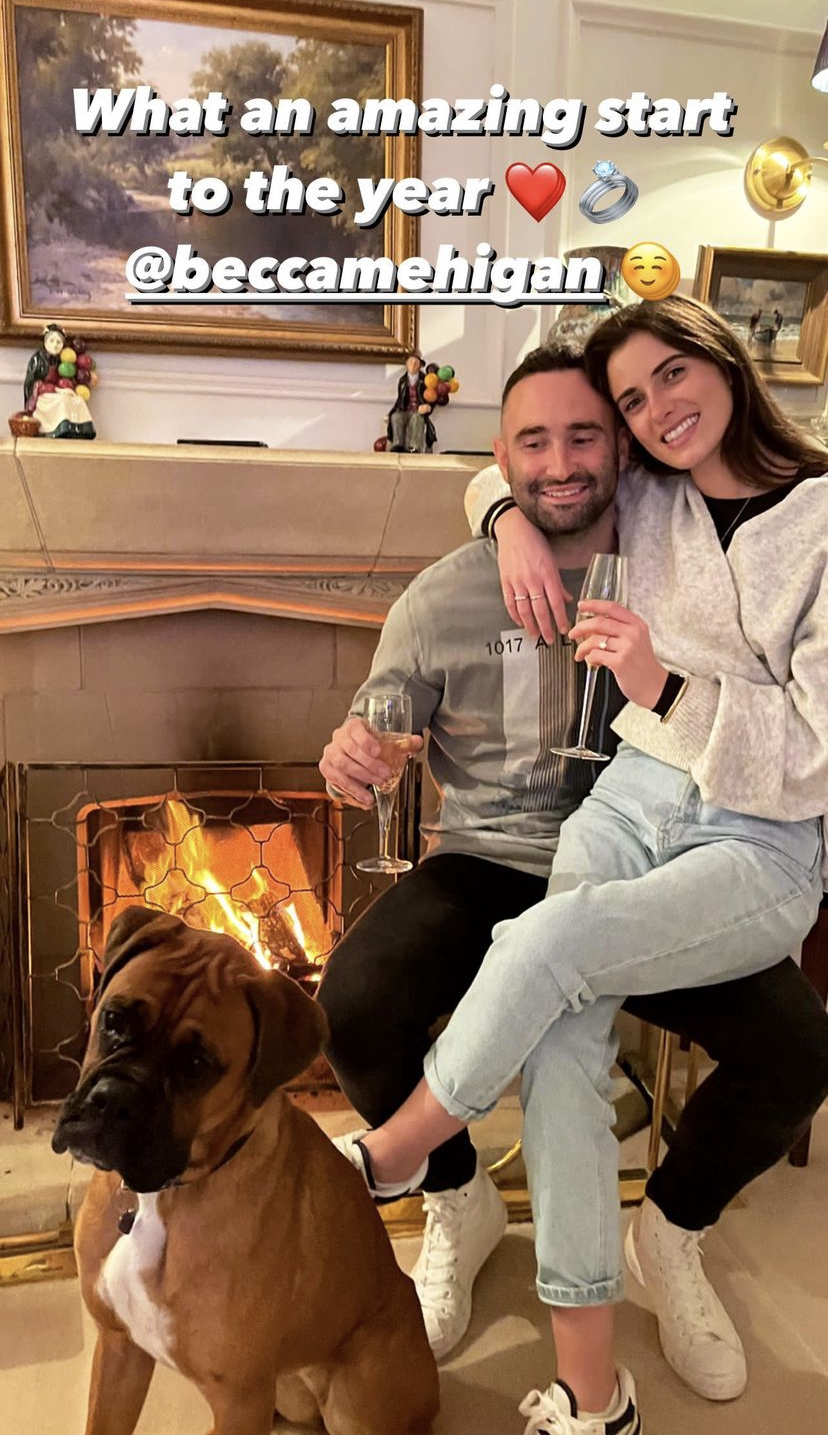 Dave Kearney announced his engagement to his girlfriend Becca Mehigan on Friday.

The rugby player shared the exciting news on Instagram by posting a sweet snap of his bride-to-be sitting on his lap, showing off a sparkly diamond ring.

He captioned the post: “What an amazing start to the year ❤️💍.”

Dave and Becca went public with their romance in April 2019, when they attended the Leinster Rugby awards together.

The actors played on-screen brothers Luke Posner (Max) and Lee Posner (Kris) on the popular soap, and have reportedly been dating since summer 2020.

Taking to Instagram to share the happy news of their engagement, Max wrote: “He deserves the world, but the best I could do was promise him my heart. HE SAID YES 🤭❤️! Happiest moment of my life. @krismoc my Fiancé 😌”

The couple shared the happy news by posting a video of the moment MGK proposed at a very sentimental location.

Megan captioned the post: “In July of 2020 we sat under this banyan tree. We asked for magic. We were oblivious to the pain we would face together in such a short, frenetic period of time.”

“Unaware of the work and sacrifices the relationship would require from us but intoxicated off of the love. And the karma.”

“Somehow a year and a half later, having walked through hell together, and having laughed more than I ever imagined possible, he asked me to marry him.”

The musician also shared a close up video of Megan’s engagement ring, which he had custom made, and wrote: “Beneath the same branches we fell in love under, i brought her back to ask her to marry me.”

“i know tradition is one ring, but i designed it with Stephen Webster to be two: the emerald (her birth stone) and the diamond (my birth stone) set on two magnetic bands of thorns that draw together as two halves of the same soul forming the obscure heart that is our love.” 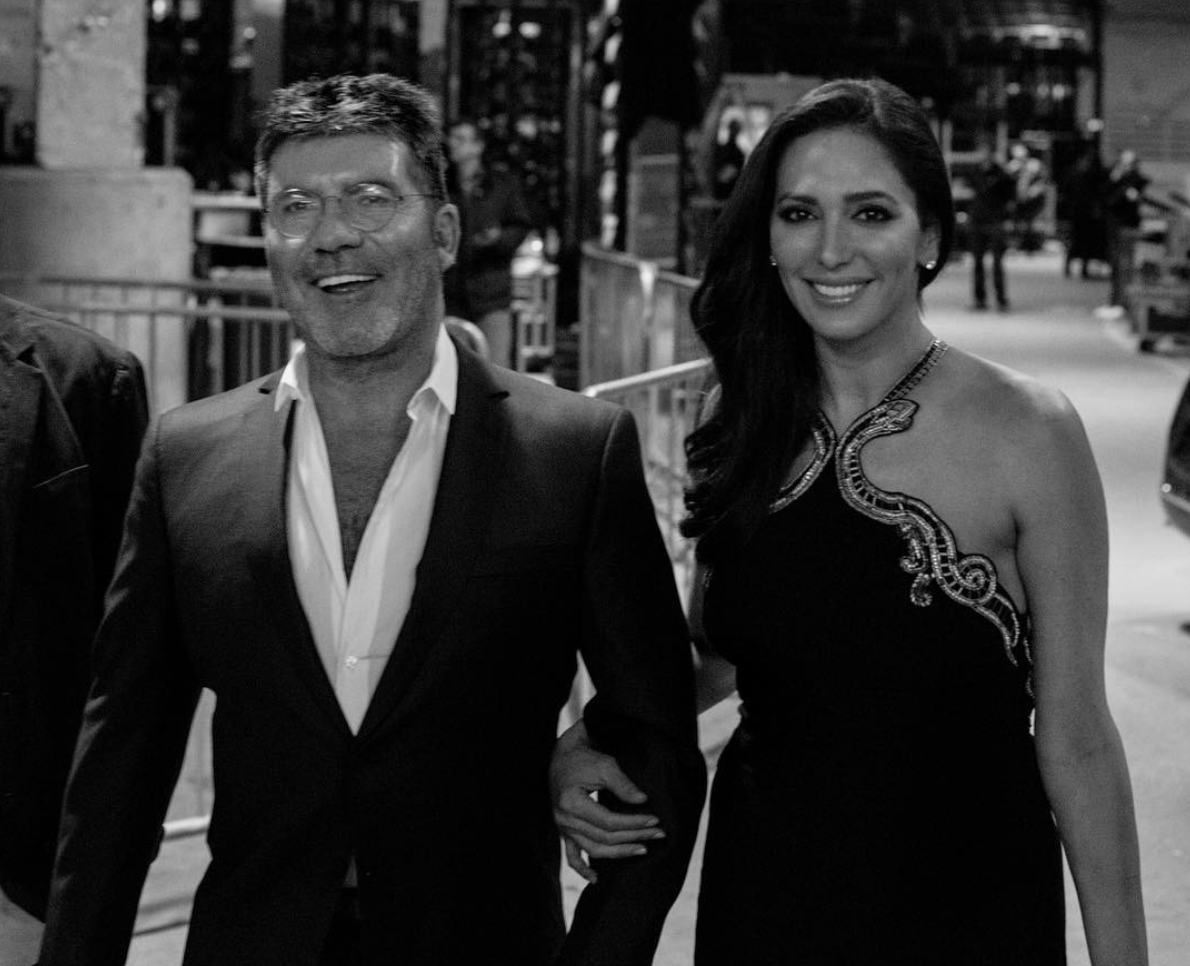 Simon Cowell proposed to Lauren Silverman in Barbados on Christmas Eve, but kept the news private until this week.

A source told PEOPLE: “They are both super happy. They’ve been together a long time now and adore each other so it’s not a huge surprise to their close friends.”

The couple’s 7-year-old son Eric, who they welcomed in 2014, and Lauren’s eldest son Adam were also present during the proposal. 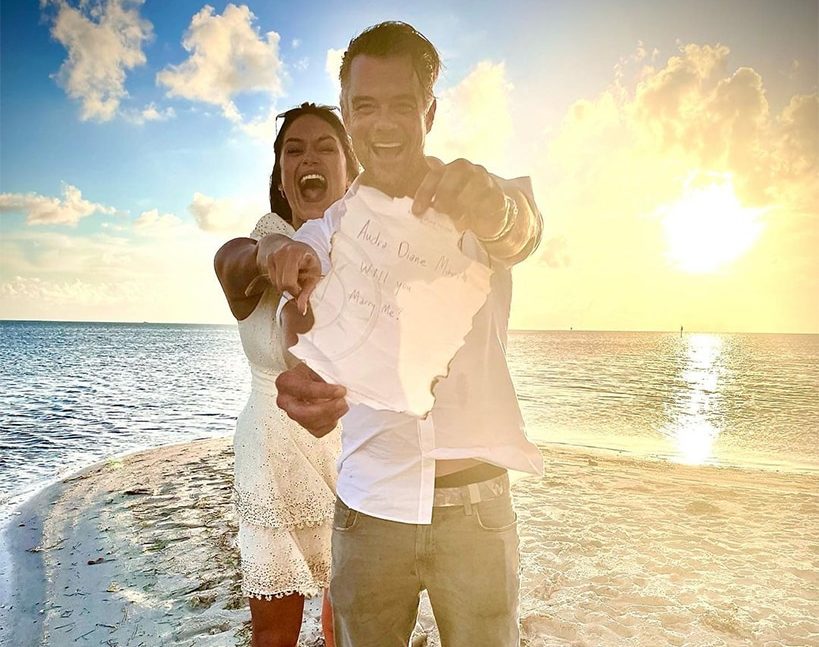 Josh Duhamel announced his engagement to Audra Mari on January 9.

The actor, who has been dating the former Miss World America since 2019, shared the exciting news via Instagram.

The 49-year-old shared a photo of him and his 28-year-old fiancée smiling on a beach, holding a crumpled piece of paper that reads: “Audra Diane Mari, will you marry me?”

He captioned the post: “It’s on!! She found a message in a bottle that washed ashore and said YES!! @audramari.”

Becky Hill announced her engagement to her boyfriend Charlie on January 11.

The 27-year-old, who rose to fame after appearing on the first series of The Voice UK, shared the exciting new via Instagram.

Alongside snaps of the romantic beach proposal in the Maldives, the singer wrote: “turns out he actually does like me 💍”

Rebecca Ferguson announced her engagement to her boyfriend Jonny Hughes earlier this year.

The singer, who came second place on X Factor in 2010, shared the exciting news on Instagram.