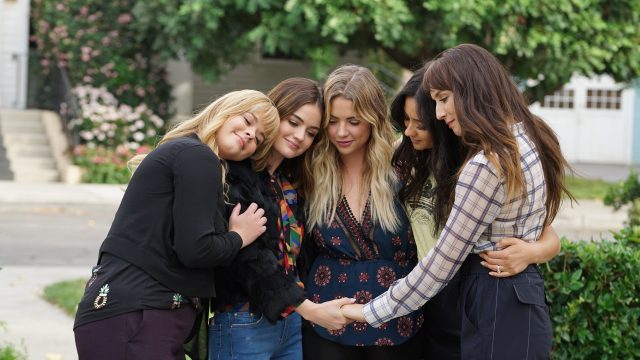 It’s hard to believe that it has been exactly a decade since Pretty Little Liars was first aired on our screens.

The teen drama was a phenomenon – and fans were obsessed with the mysteries and secrets that Alison, Aria, Emily, Hanna and Spencer had to face.

After the show came to an end in 2017, the stars of the series went on to pursue other projects.

So to mark the show’s ten-year anniversary, we’re taking a look at what the cast are up to now:

Ashley Benson played the fashionable Hanna Marin on the show.

After PLL came to an end, the actress starred in the American drama Her Smell in 2018, and met her now ex-girlfriend Cara Delevingne.

The couple dated for almost two years, however, they called it quits earlier this year after their relationship “ran its course”.

The 30-year-old has since sparked rumours she’s dating rapper G-Eazy, after they were spotted looking cosy in Los Angeles last month.

Lucy Hale starred as the studious Aria Montgomery in Pretty Little Liars, who famously had a fling with her teacher Ezra Fitz.

After the show ended, the 30-year-old landed another TV role, playing Stella Abbott in Life Sentence.

Lucy has also starred in a number of movies since 2017 – including The Unicorn, Truth or Dare and Dude.

More recently, the actress landed the role of Katy Keene in Riverdale’s new spinoff series, which airs on the CW.

After the show came to an end, Shay continued to work in the television industry, and starred in the popular Netflix series You in 2018.

The Canadian actress also has her own YouTube channel, which has over 4 million subscribers.

Shay uses her YouTube channel to document her life, including the birth of her first child Atlas Noa – who she welcomed with her boyfriend Matte Babel in October 2019.

In 2017, the actress starred in, wrote, and produced a film called Feed, and she also featured in Clara and Where’d You Go, Bernadette.

The central character of the show, Alison DiLaurentis, was portrayed by Sasha Pieterse Sheaffer.

After PLL came to an end in 2017, Sasha appeared on Dancing With The Stars in the US, and the following year she married her husband Hudson Sheaffer in Ireland.

In 2019, Sasha reprised her role as Alison in spin off series Pretty Little Liars: The Perfectionists, but the show was cancelled by Freeform after just one season.

We are so beyond excited to finally share our sweet news with all of you ✨ we will be welcoming a precious little human this October! Today marks our 2nd wedding anniversary and what better way to share our joy then on the day when our lives changed forever (the first time ????) Motherhood is officially my favorite role ever! ???? @hudsonsheaffer thank you for making me a mom and for always being my unwavering rock and safe place. You bring out the adventurer in me and I feel like my truest self when I’m with you, luckily that’s all the time! I love every part of you with every part of me and will continue to love who you are and who you become especially as we enter this brand new chapter ???? Happy Anniversary baby! ????

Shortly after Pretty Little Liars ended, the actor released a memoir called Odd Birds, and he went on to play a recurring role on Chicago Med as Phillip Davis in 2019.

He also appeared in the Oscar-nominated movie Ford v Ferrari.

As for his love life – Ian has been dating photographer and set designer Sophie Hart since 2011.

One of the show’s shadiest characters was Mona Vandarwaal, played by Janel Parrish.

After PLL came to an end in 2017, Janel starred in the popular Netflix film To All the Boys I’ve Loved Before, and it’s much-anticipated sequel.

Like Sasha Pieterse, Janel also reprised her role as Mona in spin off series Pretty Little Liars: The Perfectionists in 2019, but the show was cancelled by Freeform after just one season.

She also featured in musical theatre productions including Toronto’s Grease ensemble, and The Last Five Years.

As for her love life, the 31-year-old married her boyfriend of two years, Chris Long, in 2018.