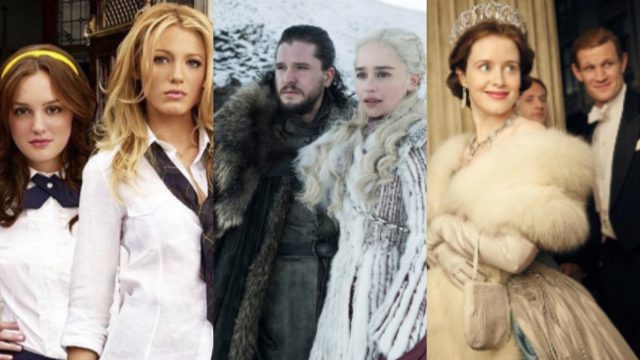 It can be tough to find new and exciting ways to pass the time if you’re self isolating at home.

So, now is the perfect time to binge watch a TV series – and we’ve listed ten brilliant ones to put on your list.

Whether you’re looking for comedy, drama, or a bit of both, these will have you glued to your couch for the foreseeable future…

If you haven’t heard about this action-packed series, you have been living under a rock!

Game of Thrones has had people hooked for years, and with 72 hours worth of TV, you definitely won’t have any difficulties with passing time.

Filled with dragons, kings, white walkers and a dashing Kit Harrington, this show is seriously entertaining.

Sex and the City

This franchise might be known for it’s two feature films, but it was originally a hit TV show on HBO.

Back in the 90s, Sarah Jessica Parker introduced us to Carrie Bradshaw – a writer who came to New York City in search of the two big L’s; Labels and Love.

With the help of her three best friends Samantha (Kim Cattrall), Miranda (Cynthia Nixon) and Charlotte (Kristin Davis), the four bombshells stick together to tackle the ups and downs of the city that never sleeps.

A lot of us probably watched this years ago, but we highly recommend watching it again from the very beginning!

The Crown gives viewers an inside look into life behind Buckingham Palace doors.

Claire Foy plays Queen Elizabeth II exceptionally in the first and second season, before Olivia Colman took over the role in season three.

The series follows the Queen’s life from her Coronation onwards, and focuses on the difficulties she faced both in her professional and personal life.

All seasons are available to stream on Netflix.

If you’re looking for some comic relief – Brooklyn Nine-Nine will have you in stitches.

The series revolves around Brooklyn’s fictional 99th Precinct, and the challenges and obstacles they have to face.

With a talented cast including Andy Samberg from Saturday Night Live, this hilarious show will have you begging for more.

The television series is currently streaming on Netflix.

It’s been thirteen years since Gossip Girl was first released, and it is still just as popular today.

But when her ex-best friend Serena, who is played by none other than Blake Lively, enrols in her school, her whole world is turned upside down.

With glamourous fashion, serious drama and a mysterious blogger, Gossip Girl is a series not to be missed.

How I Met Your Mother

How I Met Your Mother ran for an impressive nine years, and it’s not surprising.

The American comedy sitcom follows the story of Ted Mosby as he tells his two grown children how he met their mother through a series of flashbacks with his group of friends.

With nine seasons to watch, you will fall in love with these characters.

It was only released earlier this year, but The Stranger has caught the world by storm.

The show revolves around a mysterious stranger who tells family man Adam a secret which has a terrible impact on his seemingly perfect life.

With an 86% rating on Rotten Tomatoes, this British thriller will have you on the edge of your seat.

A show about a paper company does not sound like the premises for a comedy series. However, The Office proves us wrong!

The mock documentary focuses on the employees of Dunder Mifflin Paper Company and the funny misadventures they face.

With an amazing cast, including Steve Carell as Michael Scott, this show has entertained viewers for years on end.

Who can forget the fake fire drill scene? We can’t!

Modern Family may have wrapped up earlier this year, but it is still putting a smile on people’s faces.

The popular comedy series follows three modern-day families as they try to deal with quirky spouses, difficult children and balancing their jobs.

Whether you relate to dramatic Cameron or knowledgeable Alex, this series has something for everyone and will have you laughing out loud.

The acclaimed romance-drama revolves around the housewives of Wisteria Lane. The neighbourhood may seem perfect, but it is riddled with secrets, domestic problems, forbidden love and crime.

With 180 episodes and over 168 hours of television, the series will have you counting your lucky stars that you don’t live on Wisteria Lane.