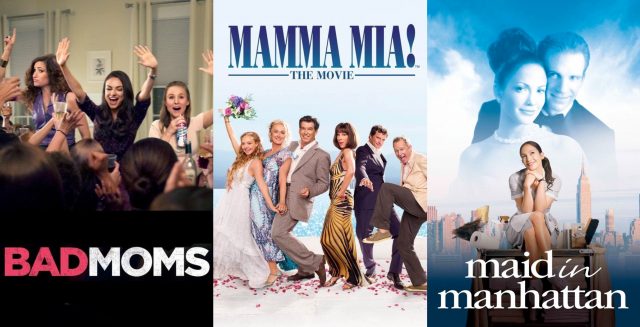 If you’re trying to think of something to do with your mum on Mother’s Day, why not just keep it simple and treat her to the ultimate duvet day?

There’s so many great movies to watch on Netflix, and with some decent snacks and plenty of blankets – we’re sure your mum will LOVE putting her feet up for the day.

From hilarious rom-coms, to heart wrenching tearjerkers – we’ve compiled a list of the perfect movies to watch with your beloved mum, to make it the best Mother’s Day ever.

Unfortunately, she’s also overworked, exhausted and ready to snap. Fed up, she joins forces with two other stressed-out mothers (Kristen Bell, Kathryn Hahn) to get away from daily life and conventional responsibilities.

As the gals go wild with their newfound freedom, they set themselves up for the ultimate showdown with PTA queen bee Gwendolyn and her clique of seemingly perfect moms.

Synopsis: When single executive Kate Holbrook (Tina Fey) decides the time is right to finally have a baby, she hires a working-class woman (Amy Poehler) from South Philadelphia to act as her surrogate mother.

However, Kate’s careful planning goes out the window when the woman shows up on her doorstep needing a place to live.

A comic battle of wills breaks out between the pair as they prepare for the blessed event and try not to kill one another in the process.

Synopsis: New York lawyer Carly Whitten (Cameron Diaz) lives by strict rules when it comes to romantic relationships, but when she falls for suave, handsome Mark King (Nikolaj Coster-Waldau), she begins an affair with him.

However, a surprise visit to Mark’s home reveals that he is married to devoted housewife Kate (Leslie Mann).

Carly and Kate direct their hurt and anger toward Mark, and when they discover yet a third woman (Kate Upton) caught in his web of lies, the three join forces for revenge.

Synopsis: To prove a point about measuring up and fitting in, Texas teen Willowdean Dickson (Danielle MacDonald) enters a local pageant run by her ex-beauty queen mom (Jennifer Aniston).

Willowdean’s protest then escalates when other contestants follow in her footsteps, revolutionising the pageant – and their small Texas town.

Synopsis: Four women whose only common ground is their kids’ preschool class, decide to get together for a harmless dinner.

The night begins as a disaster, but the combination of alcohol, karaoke, and a cute bartender leads to an unforgettable night where these seemingly different women realize they have more in common than motherhood and men.

So when Kevin pops the question after they start dating, Charlotte happily accepts. But she soon realizes that Kevin’s mom, Viola (Jane Fonda), is not quite thrilled to have a new family member.

Viola, a newscaster, has just lost her job and is feeling rather attached to Kevin, so she regards Charlotte as her new competition – and will apparently do anything to make her son call off the wedding.

Synopsis: When Gerry (Gerard Butler), the husband of Holly Kennedy (Hilary Swank), dies from an illness, she loses the love of her life.

Knowing how hard Holly will take his death, Gerry plans ahead. Beginning on her 30th birthday, she receives the first in a series of letters written by him, designed to ease her grief and encourage her to move forward to a new life.

Warning: This movie will make you BAWL.

Synopsis: Donna (Meryl Streep), an independent hotelier in the Greek islands, is preparing for her daughter’s wedding with the help of two old friends (Christine Baranski, Julie Walters).

Meanwhile Sophie (Amanda Seyfried), the spirited bride, has a plan.

She secretly invites three men (Pierce Brosnan, Colin Firth, Stellan Skarsgard) from her mother’s past, in hope of meeting her real father and having him escort her down the aisle on her big day.

Synopsis: Liz Gilbert (Julia Roberts) thought she had everything she wanted in life: a home, a husband and a successful career.

Now newly divorced and facing a turning point, she finds that she is confused about what is important to her.

Daring to step out of her comfort zone, Liz embarks on a quest of self-discovery that takes her to Italy, India and Bali.

Synopsis: The story of Marisa Ventura (Jennifer Lopez), a single mother born and bred in the boroughs of New York City, who works as a maid in a first-class Manhattan hotel.

By a twist of fate and mistaken identity, Marisa meets Christopher Marshall (Ralph Fiennes), heir to a political dynasty, who believes that she is a guest at the hotel.

Fate steps in and throws the pair together for a magical night of romance. But when Marisa’s true identity is revealed, the two find that they are worlds apart.

Synopsis: Recently separated from her husband, Alice Kinney (Reese Witherspoon) decides to start over by moving back to Los Angeles with her two daughters.

While celebrating her 40th birthday, Alice meets Harry, George and Teddy, three young filmmakers who need a place to live.

Complications soon arise when she agrees to let the men stay in her guesthouse temporarily. As Alice develops a budding romance with Harry, her newfound happiness comes crashing down when her ex shows up with a suitcase in his hand.