Sam Bird has revealed the real reason he split with Georgia Steel.

The couple announced their break-up on Wednesday and although everything seemed to be on good terms between the two, rumours quickly emerged that Georgia had cheated on the 25-year-old.

She has since denied the claims and issued a statement, which has now been deleted, as she admitted that she slept in her ex-boyfriend’s house but that “nothing did happen.” 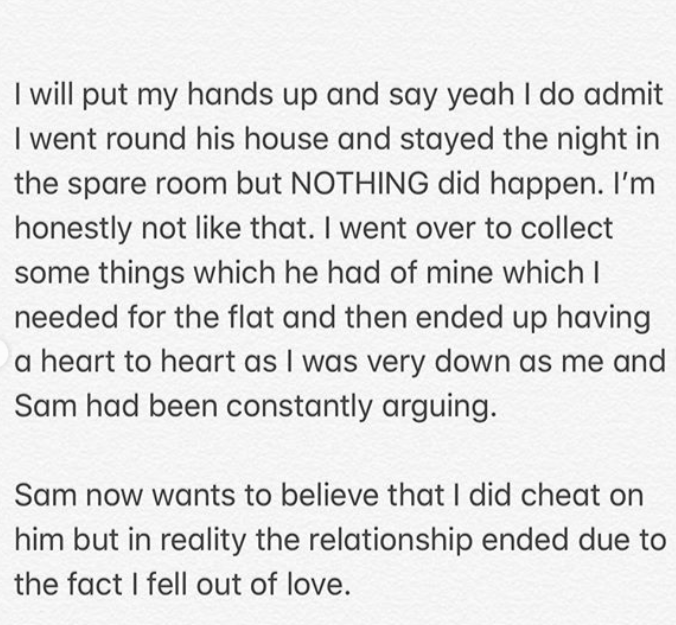 The 25-year-old later hit back at his ex, as he claimed that he discovered that Georgia had slept in her ex-boyfriend’s house twice and he even found a selfie of them in bed together.

Sam also told The Sun that he found a number of text messages between the pair and after Georgia and her ex were discussing age gaps, she reportedly texted: “I care about your d*** to be honest.”

“After the ITV Gala I sensed something was wrong – I had a gut feeling. Georgia told me she stayed with a friend after being at a PA, she said she came home and then went back out to a friend’s but that didn’t seem plausible,” he told the publication.

“I looked at her phone and found messages she sent to her mates and one of them had a selfie of her in bed with her ex and she put the word ‘oops’ and joked about it and I thought that’s not right,” the 25-year-old continued.

“Telling your ex you want their d*** isn’t banter. I saw these messages late at night while she was asleep and I screenshot them so she couldn’t lie about it. I wanted proof so she couldn’t get out of it.”

Georgia was extremely controversial on Love Island as she kissed Jack Fowler, who was coupled with Laura Anderson at the time.