Game of Thrones has released its first teaser footage of season 8.

HBO released a surprise video on Sunday night promoting its 2019 lineup, which included one tiny snippet of the eighth season of Game of Thrones.

The video contains footage from the last series of the show, and only a 3 second clip from the highly anticipated 8th and final season.

In the video we see Jon Snow embracing his sister, Sansa, after months apart.

The trailer also revealed that the cult series will return in 2019, along with ‘Big Little Lies’ and ‘True Detective’.

The visual effects supervisor Joe Bauer also talked about plans for the Game of Thrones prequel.

In an interview with the Huffington Post he revealed: “He’s blocked off his schedule until next May” for Game of Thrones work as well as the prequel.”

“The prequel is starting to shoot in February, at least the pilot,” he said. “So we’ll still have quite a lot to do on season 8 when they’re beginning.”

The eighth and final season of the hit show based on George R. R. Martin writings will have only six episodes. 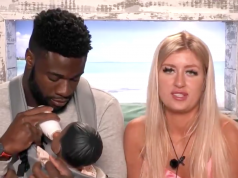