Longitude is taking over Marlay Park this weekend and celebs have been stalling to the festival in their droves.

Conor McGregor rang in his 30th birthday at the festival, chilling backstage with some of the major acts.

Other celebrities who went along to the three-day event included Holly Carpenter.

She was glowing, having just arrived back in Ireland following a long holiday in France.

Jo Archbold appeared to have taken a day off gig photography yesterday.

She posed without her camera on the Made By Music festival which overlooks the festival.

Joined by Scott Fitzsimons, the pair enjoyed the respite from the crowds offered by 3’s space.

Baz Ashmawy proved he was the coolest stepdad in Dublin again, bringing Jake King along to the VIP section.

The dad-of-two and stepdad-of-four wrote on Instagram, “Hung with Jake juuuuust long enough b4 I completely cramped his festival style and he ditched me.”

Thanks to @threeireland for letting me charge my phone so I could wander off like an old unwanted lion🦁 and get a cab home. On my own. Alone.😭”

He joked, “Kids can be so cruel😈 At least Post Malone was DEADLY🎤🔥 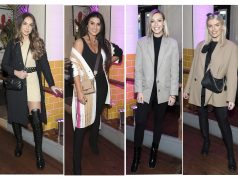