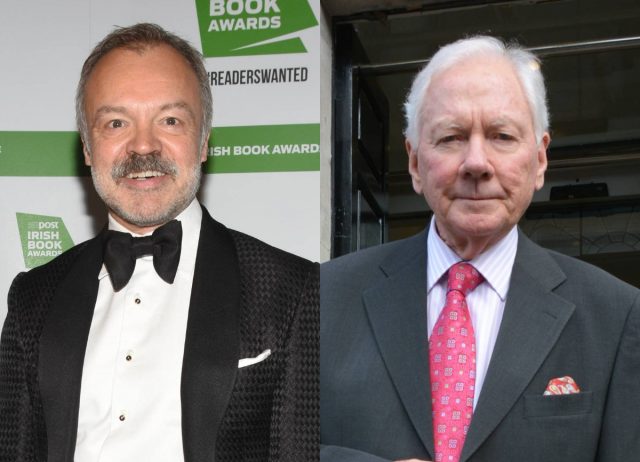 Graham Norton has recalled the first time he was ever on The Late Late Show with Gay Byrne, as he paid tribute to the broadcaster.

At 85-years-old, Gay sadly passed away at his home in Dublin yesterday, three years after he was diagnosed with prostate cancer in 2016.

Speaking to Ryan Tubridy on RTÉ Radio One this morning, fellow broadcaster Graham said it was a dream come true when he was first asked to appear on The Late Late Show with Gay.

He said: “It was a very important time. There aren’t many moments in your life where you feel, ‘this is it, I’ve made it’ but to be on The Late Late…”

“It meant so much to my dad, he wasn’t feeling so well at the time but he made it up to Dublin to be in the audience and it was very special. ”

Graham continued: “It was towards the end of Gaybo’s tenure. It was me and Terry Wogan and Gay, both of them were so nice to me.”

“I had been doing my show for maybe two years but they both talked to me as if we all did the same job. There was no talking down to me. They weren’t patronising.”

“Afterwards we went into the Green Room and Gay was still the host. Making sure everyone had a drink. It felt like the place to be. I remember thinking to myself ‘I must stay like this, I mustn’t get jaded. I mustn’t get tired. I must stay interested in the way that this man is.'”

“I didn’t learn I didn’t listen. I never go to the Green Room. They [Terry and Gay] never got jaded. It was their medium and they loved it,” Graham said.

The presenter, who hails from Cork, added: “Aren’t we lucky that Gay found it, he could’ve done something else but we’re so lucky that he found television so early, had this sort of weird instinct and he understood the medium completely.”

“Those people are so rare. There was no sense of him being a presenter, he just was – just Gay Byrne on the television.”

“I don’t know if Gay ever understood how important the show was. I imagine he did because he let the light in on so many subjects and he allowed people to exist, people who hadn’t existed before, he put them on the TV.”

“And you went ‘oh right, they’re alive, they’re in the world they have an opinion, they have thoughts.’ As a young person growing up it was incredibly influential.”

“I mean he interviewed Mother Theresa in the studio, now that’s a good booking,” Graham joked.