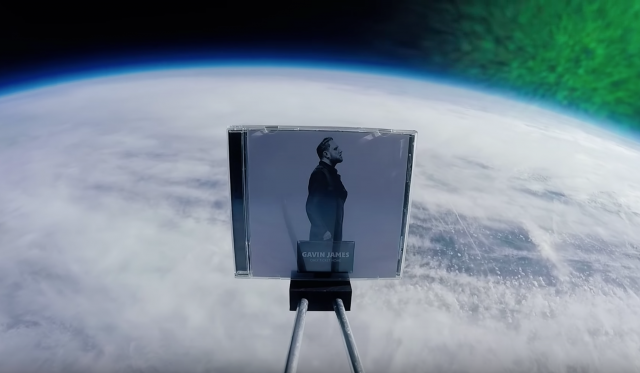 Gavin James has become the first pop star ever to launch an album into space.

To celebrate his newest release, One Ticket Home, the singer launched his record into outer space – 50km over earth to be exact.

Edison Waters of Collective Management and PR, who’s a rep for Gavin, told RTÉ Entertainment: “We’ve been trying to do this for eight years and I was recently inspired by Elon Musk launching one of his electric cars into space.”

“Gavin’s new album Only Ticket Home has a travel theme so this was the perfect time to do it.”

“The earth’s horizon in the video is a thousand kilometers away. We had to do the launch at least 50 miles away from any flight paths as we didn’t want the EI107 from Dublin to London colliding with Gavin’s album.

“I know NASA put an album on the Voyager space craft but this is the first time an artist has actually launched a physical album into space. It’s a unique album launch. In fact, it’s a real album launch.”

The Always singer launched his new album from a “secret location”, by attaching it to a weather balloon.

Gavin said, “We’re sending the album into outer space because it’s out of this world,” said the singer at the launch, which took place in a field somewhere.

Only Ticket Home is set for release on Friday, October 26.