Downton Abbey‘s Allen Leech has revealed that the film will leave fans in tears.

The 37-year-old played Tom Branson in the popular series and hinted that the film isn’t what fans would typically expect it to be.

“It’s Julian – you’re going to have tears. He’s never too saccharine-sweet, so be prepared for everything,” the actor told The Independent, speaking of the film’s creator, Julian Fellowes.

Quick catch up after 9 holes of gol……. after rehearsals, rehearsals and scene study! #inthemoviedowntonbecomesagolfcourse @downtonabbey_official

“I was very surprised about the angle that Julian went with. But then again, I was also amazed that he managed to get the entire 22-[member] cast to have their own story within the contained two-hour movie.”

The Downton Abbey film is set to be released on 13th September 2019. 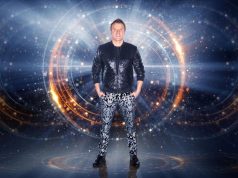