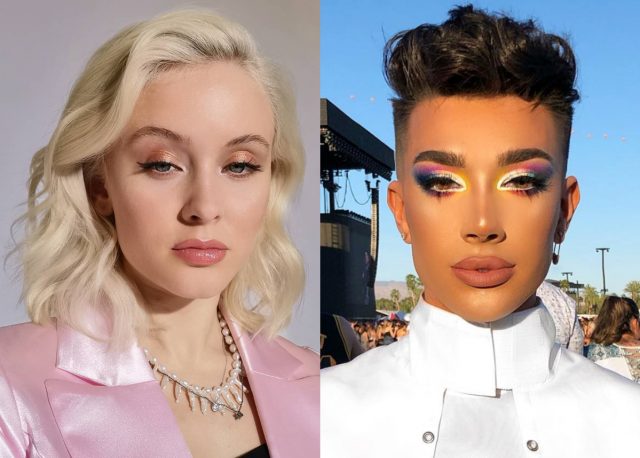 Zara Larsson has apologised to James Charles, after she called him out for DMing her boyfriend.

The singer accused James of hitting on her boyfriend on Twitter earlier this month, after Tati Westbrook called him out for allegedly propositioning straight men.

However, James later responded to her claims in a YouTube video titled ‘No More Lies’, and branded Zara a hypocrite, considering she met her boyfriend by flirting with him over social media.

In an apology posted on Twitter and Instagram, Zara said: “When I wrote my tweet saying you hit up my boyfriend, I never in a million years expected it to blow up the way it did.”

#JamesCharles retaliates against #ZaraLarsson asking why it’s okay for her to approach guys publicly on social media but it’s wrong for him to DM guys privately.pic.twitter.com/ct55lEG97u

“I feel extra bad considering the fact that I later on corrected myself and took down the tweet after my boyfriend talked to me and showed me the DM. It really wasn’t that bad.”

“Of course you’re allowed to flirt with people online, like I did, and to call someone beautiful in the comments is only nice! No harm done,” Zara continued.

“I do think it’s disrespectful though to try it with someone who is taken and I must admit I have a hard time believing you didn’t know that we were in a relationship since he posts about me.”

“What seems to be the thing here is that my boyfriend wasn’t the only one and that’s why I don’t condone that behavior. You have for example previously tweeted saying that straight men will be the death of you etc which is concerning considering the fact that they will never give consent, since they don’t play for team D,” she said.

.@ZaraLarsson addresses @JamesCharles following his response to her tweet in his latest video:

“I have a hard time believing you didn’t know that we were in a relationship… I’m sorry for the heavy anxiety you must’ve been going through these past weeks.” pic.twitter.com/mGIWvPuWa7

“Hopefully good things will come out of this cause I [believe] you have a good heart… And I whole heartily believe that one of the reasons this got way out of proportion is homophobia and the fact that this [affected] straight men.”

“I’m sorry for the heavy anxiety you must’ve been going through these past weeks,” she added. “I have a lot of anxiety myself, which is one of the reasons I’m writing this. If I don’t clear this up I won’t be able to sleep at night.”

Zara has since deleted her apology, and explained that she removed it due to her analogy about James’ alleged behaviour being comparable to straight men trying to sleep with a lesbian.

I always try my best to learn and apologize if I’m wrong. I’m sorry @jamescharles for getting involved before I actually knew the truth and for the anxiety you must have felt about everything 💗 pic.twitter.com/8U64W5D8Jy

In a new post, the singer explained: “I always try my best to learn and apologize if I’m wrong. I’m sorry @jamescharles for getting involved before I actually knew the truth and for the anxiety you must have felt about everything.”

In response, James tweeted: “Thank you @zaralarsson for addressing this. I really appreciate it, and i accept your apology!! all love from me and the sisters.”